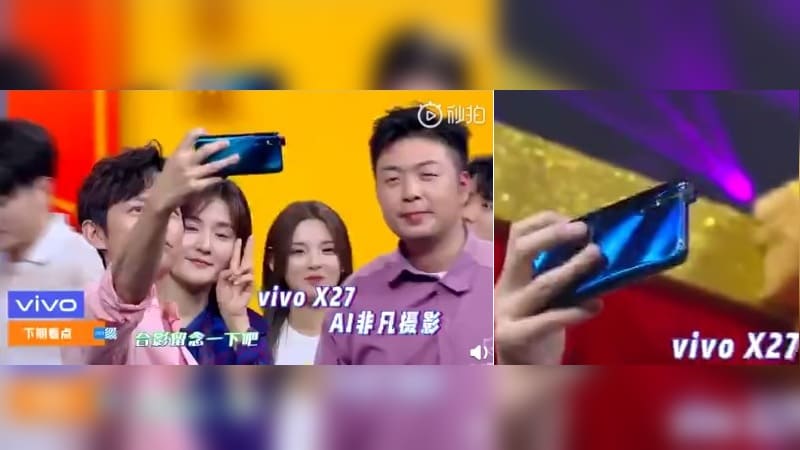 A trio of images and a short clip of a Chinese TV show have surfaced online in which the host can be seen clicking a group selfie using a smartphone that looks quite similar to the Vivo V15 Pro (Review), down to the signature pop-up selfie camera and the gradient blue colour scheme. It appears that the Vivo V15 Pro will be rebranded and launched as the Vivo X27 in China. However, the smartphone in question can also turn out to be the Vivo V15 that was launched earlier this month and also features a triple rear camera setup, a pop-up selfie camera, and flaunts an identical gradient blue design. The alleged Vivo X27 images and video were posted on Twitter.

An unannounced Vivo smartphone with the model number V1829T was recently spotted on TENAA, hinting that a launch is imminent in the Chinese market. The Vivo smartphone's specifications on TENAA's database mention a triple rear camera setup consisting of a 48-megapixel sensor paired with a 13-megapixel and a 5-megapixel sensor. The alleged Vivo X27 listing also revealed that it packs 8GB of RAM and up to 256GB of inbuilt storage, while Android 9 Pie handles things on the software side.

There is also a mention of an in-display fingerprint sensor and support for fast charging, both of which are also present on the Vivo V15 Pro. However, the battery capacity and memory configuration are different. There is no word from Vivo regarding the launch of Vivo X27 in China as of now.