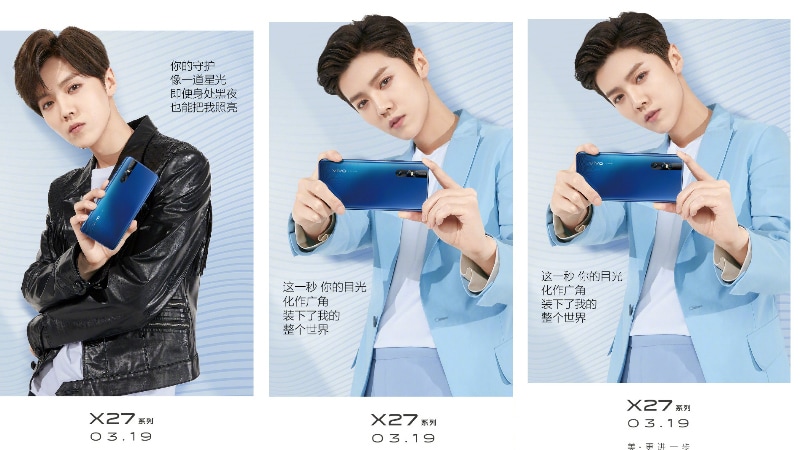 Vivo X27 Pro has been tipped to launch alongside Vivo X27

Vivo X27 is all set to launch in China on March 19, and ahead of that, video teasers have been shared by the company. The video teasers reveal little, but they do emphasise that the Vivo X27 is built keeping the fashion enthusiast in mind. Separately, a new Vivo X27 Pro variant has also surfaced online, and it is tipped to sport a wider pop-up selfie camera, amplified specifications, and a higher price tag. The Vivo X27 looks similar to the Vivo V15 Pro released in India recently, and it comes with a pop-up selfie camera and a triple rear camera setup. Running up to the launch, Vivo has already started taking registrations on its website.

The Vivo X27 video teasers have been reuploaded on YouTube, and the short clips reveal little about the phones specifications, though the Weibo posts do confirm the 48-megapixel rear camera, wide-angle lenses, and a night view mode. The phone is seen sporting a triple rear camera setup, but the pop-up selfie sensor is not seen in action.

In any case, the two teasers do emphasise that the phone will please the fashion conscious. As we mentioned, the Vivo X27 launch is set for March 19. A previous live image leak had shown a design similar to the Vivo V15 Pro. A bunch of teaser images (seen above) also show off the rear panel, revealing a design very similar to the V15 Pro and once again confirming the 48-megapixel primary camera sensor

Separately, the Vivo X27 Pro poster has been leaked on Weibo showing off its design, and the phone is seen to sport a wider pop-up selfie camera mechanism that houses a flash, and reportedly a higher pixel-count sensor than the Vivo X27. The posters also reveal that the triple rear camera setup is situated in the rear centre, instead of the left end as seen on the Vivo X27. The placement of the flash is also different than the vanilla variant.

The tipster also reveals specifications and price of the Vivo X27 and Vivo X27 Pro alongside. The Vivo X27 Pro is reported to sport a 6.7-inch display, and 32-megapixel sensor with an LED flash up front. The phone is listed to be powered by the Snapdragon 710 SoC paired with 8GB RAM and 256GB inbuilt storage, while it is listed to run on Android 9 Pie. The triple rear camera setup will consist of a 48-megapixel Sony IMX586 sensor, a 13-megapixel sensor, and a 5-megapixel sensor, the leak adds. The phone is said to pack a 4,000mAh battery with 22.5W charging. On the other hand, The Vivo X27 is said to have the same specifications except for a few differences - it is tipped to sport a smaller 6.39-inch display, and a 16-megapixel selfie sensor.

All of these specs are consistent with the TENAA leak recently, and the two phones are also tipped to sport an in-display fingerprint sensor. We recommend you take all leaks with a pinch of salt until official release on March 19.