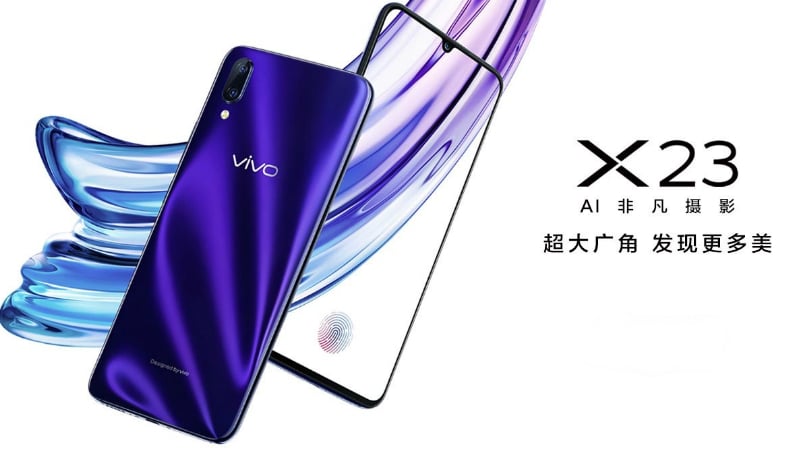 Vivo X23 will arrive in Purple and Blue colour options

Vivo seems to be following the increasing trend of multiple successors launch within the span of one year. The Vivo X21 was made official in March this year and came to India just two months ago, and now just six months after its initial launch, it is making the successor Vivo X23 official. The company has listed the smartphone on its Chinese website, and is taking reservations for the same. Now, that the Vivo X23 is official, pricing and availability details should be announced by the company soon as well. The Vivo X23 is seen to sport a waterdrop display notch and a vertical dual camera setup at the back.

The Vivo X23 has been listed on its Chinese official site, with availability pegged as 'coming soon'. The reservation button for interested customers has been made live, and a few features have been highlighted. The website confirms that the Vivo X23 will have a screen to body ratio of 91.2 percent, a glass panel that will feature a 3D design for a premium gradient finish in varied colour options. It is also set to come with a fourth generation in-display fingerprint scanner. A waterdrop display notch is seen in the front, similar to the one on the Oppo F9 Pro, and a vertical dual camera setup sits at the back. The Vivo X23 is seen to sport Purple and Blue colour options on the website, but more colour may be announced on launch day. Full specifications are not yet listed on the page, though they should be listed soon.

Previous leaks suggest that the Vivo X23 will come with advanced 3D face recognition, a next-gen in-display fingerprint scanner similar to the one found on the Xiaomi Mi 8 Explorer Edition, a 6.4-inch fullscreen display, and a Qualcomm Snapdragon 670 processor paired with 8GB RAM. Additionally, the smartphone will feature "independent" audio DAC as well.

Earlier this week, the smartphone's launch date was tipped as August 23, and if this is true, then we are just days away from the pricing, specifications, and availability details as well.