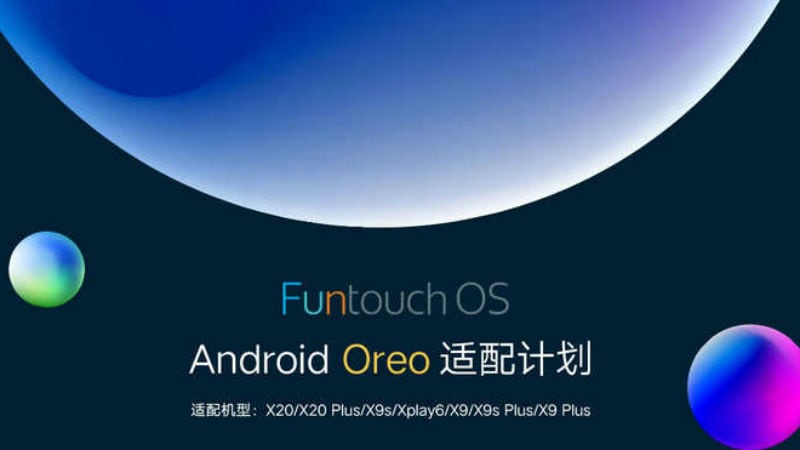 Vivo has announced that it is set to bring Android Oreo to its various smartphone models. The new Android version will debut on as many as seven Vivo smartphones that belong to the X series, including the Vivo X20, Vivo X20 Plus, Vivo X9s, Vivo X9s Plus, Vivo XPlay6, Vivo X9, and Vivo X9 Plus. Importantly, the Android Oreo experience will come through a Funtouch OS upgrade that is scheduled for April this year.

Ahead of releasing the final Android Oreo builds, Vivo is supposed to launch a beta version, as per the information available on Vivo forums in China. Details about the beta release are likely to emerge through the official forums in the coming future. Moreover, following the new beta release, Vivo will push Android Oreo via an OTA (over-the-air) update. You need to run the latest software version on your Vivo smartphone in order to get the newest Android flavour. To check the availability of a new software version, you need to go to Settings > About phone > System updates.

Vivo hasn't revealed any information about the features it is designing to incorporate alongside the Android Oreo update. However, it is quite expected that the new update will bring core Android Oreo features, including Smart Autofill, Picture-in-Picture (PiP) mode, and Notification Dots amongst others.

In the list of eligible models for the Android Oreo update, the Vivo X20, Vivo X20 Plus, Vivo X9s, and Vivo X9s are presently running Android 7.1 Nougat. The Vivo Xplay6, Vivo X9, and Vivo X9 Plus are, on the other hand, were debuted with Android 6.0 Marshmallow. These three smartphones were launched jointly in China back in November 2016.

Jio Phone Emerges Leader in Indian Feature Phone Market: CMR
WhatsApp Payments Rolling Out in India: How to Get Started With the UPI-Based Service