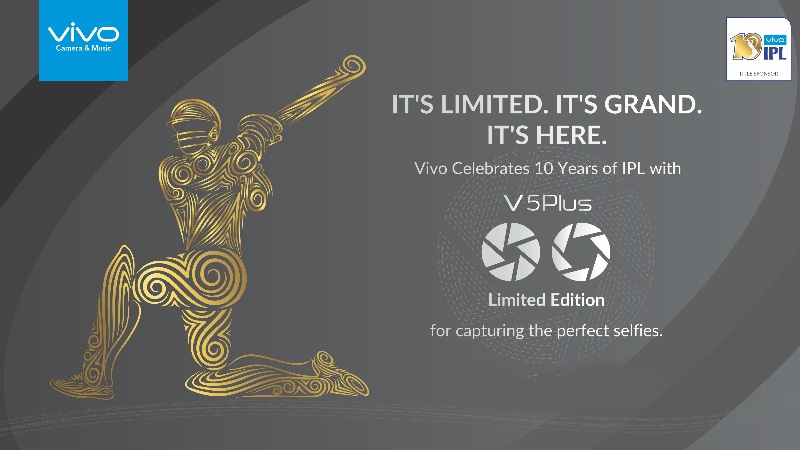 With IPL 2017 set to start on Wednesday, April 5, title sponsor Vivo will launch on Tuesday the Vivo V5 Plus IPL Limited Edition model to mark the event. The new model will be unveiled at an event in Hyderabad a day ahead of the official IPL 2017 launch. IPL 2017 opening ceremony and first match are on Wednesday.

It is unlikely that Vivo V5 Plus IPL Limited Edition smartphone will have specifications different from those of the standard model, but the outer design would presumably be tweaked. It may have a few IPL-related apps pre-loaded as well. The availability and price of the device will be announced at the event on Tuesday.

The Vivo V5 Plus smartphone was launched in India in January, and is priced at Rs. 27,980. The device was made available with both offline and online retailers in February.

The dual-SIM selfie-focused smartphone runs on the company's Funtouch OS 3.0, based on Android 6.0 Marshmallow. Its biggest highlight is its dual front camera setup. It sports a 20-megapixel camera with the Sony IMX376 1/2.78-inch sensor, an f/2.0 aperture, and a 5P lens system, while it also sports a 8-megapixel camera that's meant to capture depth-of-field information.