The rumoured iQoo 3 Pro 5G with the same model number and Snapdragon 865 SoC was spotted on Geekbench in June. 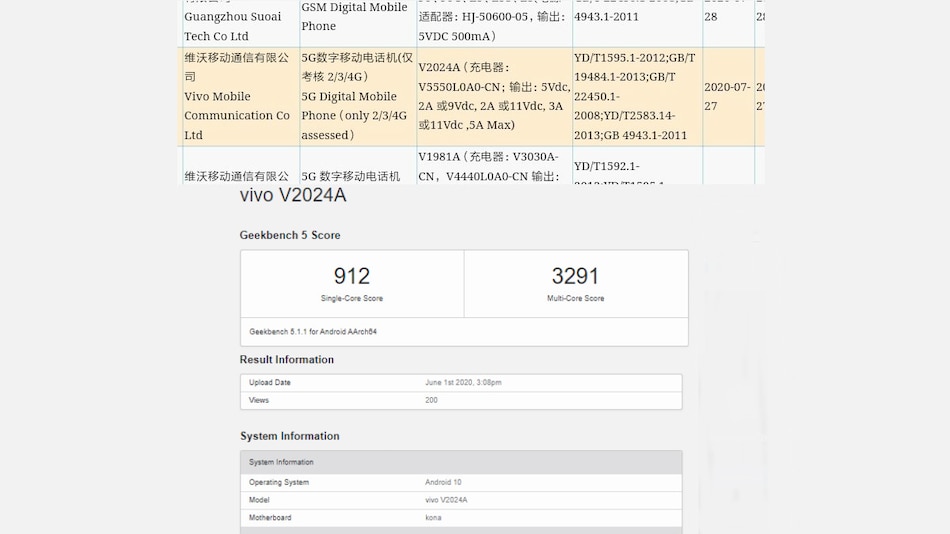 The iQoo 3 Pro 5G is claimed to be launched in three variants in China.

Vivo phone with a model number V2024A has reportedly passed the 3C certification in China, and speculation has it could be the iQoo 3 Pro 5G. According to an image circulating on the internet, the phone has 5G and 55W fast charging support. This is also a hint that the handset may go official as early as next month. What's interesting is that a phone sporting a Qualcomm Snapdragon 865 Plus processor and the above mentioned model number was spotted on Geekbench in June. Media reports are claiming that this device could be the iQoo 3 Pro 5G or any other flagship smartphone from Vivo.

The image of the 3C certification has been tweeted out by a user with handle @yabhishekhd. He also posted an image of the above mentioned Geekbench listing which was first spotted by Gizmochina. The listing reveals that the phone runs on Android 10 and comes with 8GB of RAM.

According to a report by GSMArena, the ‘2024' in the model number is a sequential number in Vivo's portfolio. Since Vivo has already launched the Nex 3S 5G with a Qualcomm Snapdragon 865 processor, we might not see a Vivo device with flagship hardware. This hints that the device in question is likely an iQoo-branded smartphone.

The iQoo 3 Pro 5G is claimed to feature a 6.56-inch AMOLED display with 90Hz refresh rate and an in-screen fingerprint reader. It is said to come equipped with the Snapdragon 865+ SoC, coupled with up to 12GB of LPDDR5 RAM and 256GB of UFS 3.1 storage. In the camera department, the phone could feature a Sony IMX586 48-megapixel sensor, an 8-megapixel sensor and a 13-megapixel sensor on the back. For selfies, it will reportedly sport a 16-megapixel camera.