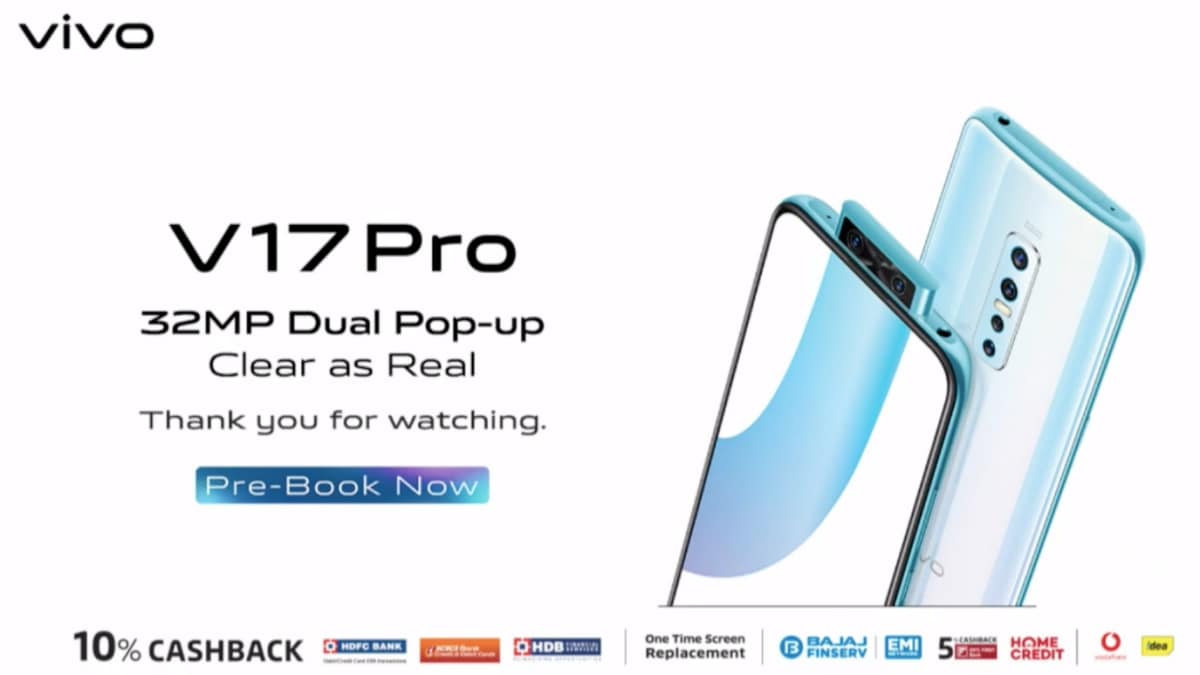 Vivo V17 Pro launch event started with the company's Nipun Marya on the stage. Marya began by talking about the company's last few months in the country. According to Marya, Vivo smartphones account for 68 percent of the sales in the Rs. 25,000- Rs. 30,000 price segment. He added that Vivo is now the fastest growing smartphone brand in the country with a year-over-year growth of 55 percent. Additionally, Marya also briefly mentioned the Nex 3 that was launched in China recently and offers a screen-to-body ratio of 99.6 percent.

Marya then moved on to the Vivo V17 Pro, the launch of the day, and invited Ankit Malhotra on the stage to detail the new smartphone. According to Malhotra, the V17 Pro houses two cameras on the front as a part of a pop-up setup - a 32-megapixel main selfie shooter and an 8-megapixel wide-angle shooter, joined by a Moonlight flash. The phone's camera app will come with a Pose Master feature that will suggest poses for selfies, based on how other people around the world are taking their selfies. Other features include Super Night Mode and Shot Refocus. Additionally, the phone's front shooter is covered by Sapphire glass to scratch-resistance.

On the rear, the phone had a quad camera setup that includes a 48-megapixel f/1.8 main shooter, a 13-megapixel f/2.5 telephoto camera with 2x optical zoom, an 8-megapixel f/2.2 Super Wide-Angle camera, and a 2-megapixel depth sensor with an f/2.4 lens. Vivo V17 Pro's back is also covered with Gorilla Glass 6.

Among other specifications, the phone will include 8GB of RAM, 128GB of onboard storage, 4,100mAh battery with 18W fast charging support, and Android 9 Pie with Funtouch OS 9. Malhotra then invited Jerome Chen, CEO, Vivo India, on the stage to reveal further details and the price of the new phone.

The event is over. You can check out the complete event video below.