Vivo S6 5G is expected to be powered by Exynos 980 chipset, as suggested by a Geekbench listing. 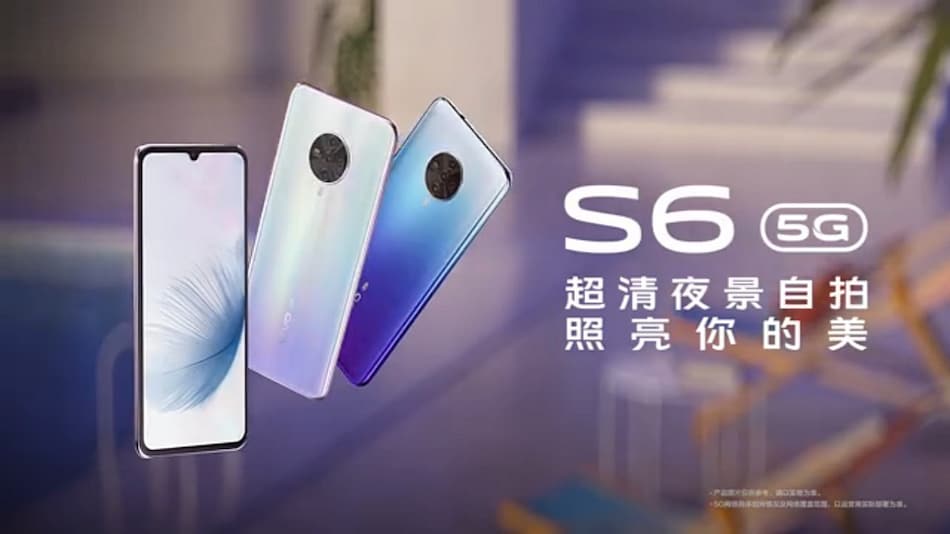 Vivo S6 5G will be offered in in two colour options

Vivo has released a promo video for the upcoming Vivo S6 5G smartphone on its Weibo page and it confirms the notched display as well as the phone's colour options. The video shows the front, back, and sides of the phone but not the top and bottom. There are feathers flying around in the video that suggest that the phone will be lighter than the company's other devices. The Vivo S6 5G will launch on March 31 that was previously revealed by the company itself through a poster on its Weibo page.

The 30-second promo shared on the Chinese social media website draws comparisons between the Vivo S6 5G and a feather, with a shot showing the phone on a weighing scale against an unknown object, again indicating that the phone will be very light. The front shot of the Vivo S6 5G confirms the notched design housing the selfie shooter and the oreo-shaped camera module on the back that was previously teased by the company.

Talking about the colour options, the Vivo S6 5G will come in a blue gradient and a lighter pink gradient option. The circular module on the back can be seen housing the four cameras. It is expected that the primary camera will be a 48-megapixel shooter, accompanied by an 8-megapixel secondary shooter, and two 2-megapixel cameras. The selfie camera may be a 32-megapixel shooter.

While not much about the specifications has been confirmed, speculations suggest that the Vivo S6 5G will have a 6.44-inch full HD+ (1080x2400 pixels) AMOLED display with a 20:9 aspect ratio. It may come with Android 10 out-of-the box, up to 8GB RAM and 256GB storage. A Geekbench listing hinted at the presence of Exynos 980 chipset.

The Vivo S5 5G will be launched in China on March 31 as previously stated by the company through a poster on Weibo.