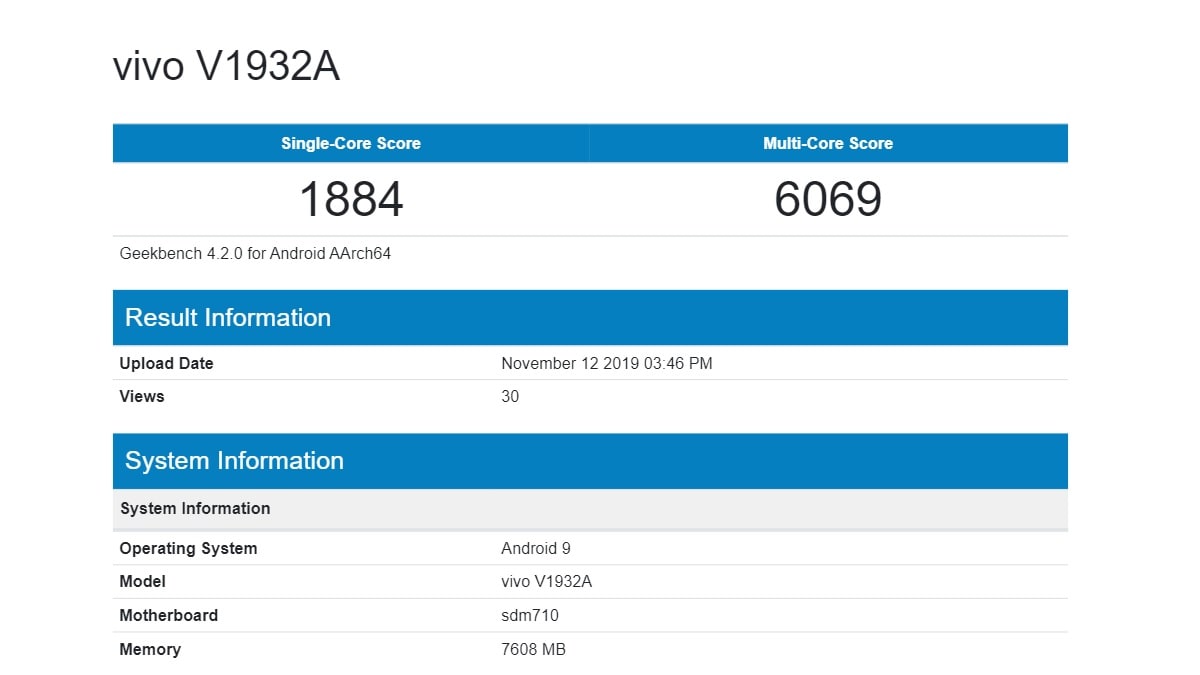 Vivo S5 will be launched at an event today in China

Vivo S5 will go official today, but we already have a good idea of how the phone will look, thanks to the numerous official renders shared by the company on social media. Just a day ahead of its launch, the Vivo has been spotted on Geekbench, revealing some of its key specifications in the process and showcasing its processing prowess. The Vivo S5 was spotted on Geekbench with 8GB of RAM ticking alongside the octa-core Qualcomm Snapdragon 710 SoC.

Vivo S5 will be launched today in China, with its launch event starting at 7:30pm CST (5pm IST). You can see the launch live stream on the Vivo shop website and keep up with the live updates on the Vivo Weibo account as well as Gadgets 360.

The Vivo S5's Geekbench listing shows the phone running Android 9 Pie, while drawing power from the Qualcomm Snapdragon 710 processor clocked at 1.71GHz. The Vivo S5, whose model number is listed as V1932A on the benchmarking database, scored 1,884 and 6,069 and in the Geekbench single-core and multi-core tests respectively.

Earlier this month, the Vivo S5 was spotted on TENAA as well with an identical 8GB of RAM and revealing 128GB and 256GB storage options. The onbard storage on the Vivo S5 can be expanded up to 256GB via a microSD card. The phone will feature a 6.44-inch AMOLED display with full-HD+ (1080 x 2400 pixels) resolution that will source power from a 4,010mAh battery.

Artificial Intelligence-Created Paintings to Be Put on Sale by Sotheby’s in New York
Children's Day 2019: Google Set to Announce 'Doodle for Google' Winner