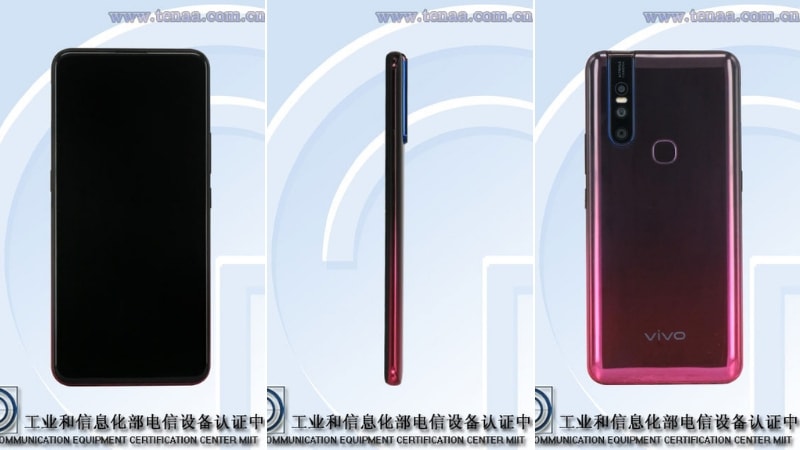 Vivo S1 may be the next smartphone from the Chinese smartphone maker to its India debut. If an online report is to be believed, Vivo is said to be gearing up to launch a new smartphone in the country, which will be online-exclusive and compete directly with Realme and Xiaomi phones. Carrying model number V1831, the smartphone is said to be a part of the company's new S Series that is reportedly debuting in China next week alongside the upcoming Vivo X27 and X27 Pro smartphones.

As per two TENAA listings on the Chinese regulator's website, the Vivo S1 will run on Android 9 Pie and sport a 6.53-inch full-HD+ (1080x2340 pixels) screen. The smartphone is going to be powered by an unnamed octa-core processor clocked at 2.1GHz with 4GB/ 6GB of RAM. Further, the company is including 128GB/ 256GB of onboard storage with a microSD card slot (up to 256GB) and 3,860mAh battery in the smartphone.

For the imaging needs, the S1 will house a triple camera setup on the back with 12-megapixel, 8-megapixel, and 5-megapixel sensors. There will also be a 24.8-megapixel front shooter on the phone and a rear capacitive fingerprint sensor.

A sighting of the phone on Geekbench has indicated that onboard chipset is going to be MediaTek's MT6771 Helio P60, which is based on 12nm manufacturing process and packs four Cortex-A53 and four Cortex-A73 CPU cores. The Geekbench listing has also confirmed the presence of Android 9 Pie on the smartphone.

The official price tag of the phone remains a mystery for now, but a Weibo user indicates that the Vivo S1 will be priced starting CNY 2,298 (roughly Rs. 24200) in China. The base variant of the phone is likely to feature 4GB of RAM and 128GB of inbuilt storage.

Vivo has already confirmed that it is hosting a press event on March 19 in its home market where it will be introducing the Vivo X27 and Vivo X27 Pro smartphones. It is believed that the company will use the same event to unveil the Vivo S1 as well.

A report in 91Mobiles claims that the Vivo S1 will reach India soon after its China release, and the phone will be exclusive to online sales channels. The report also notes that Vivo is hoping to take on the likes of Realme and Xiaomi with this smartphone.

In a separate report, 91Mobiles has noted that the Vivo V15 will go on sale starting March 15 in the country. The phone is said to carry a price-tag of Rs. 22,990. The company is yet to officially reveal the pricing or availability details for India. The Vivo V15 was recently launched in Thailand and Malaysia markets.

The Vivo V15 runs Funtouch OS 9 based on Android 9.0 Pie and features a 6.53-inch full-HD+ (1080x2340 pixels) display. It is powered by an octa-core MediaTek Helio P70 SoC, paired with 6GB of RAM. The phone also comes with a pop-up selfie camera with a 32-megapixel sensor and an f/2.0 lens. There is also a triple camera setup at the back that has a 12-megapixel primary sensor along with an f/1.78 lens, 8-megapixel secondary sensor with an f/2.2 lens, and a 5-megapixel tertiary sensor with an f/2.4 lens.

Karpeles: Bitcoin Baron Brought Down With a Bump
Android Q Beta Could Come With a Dedicated Feedback App, Suggests a Leaked Document