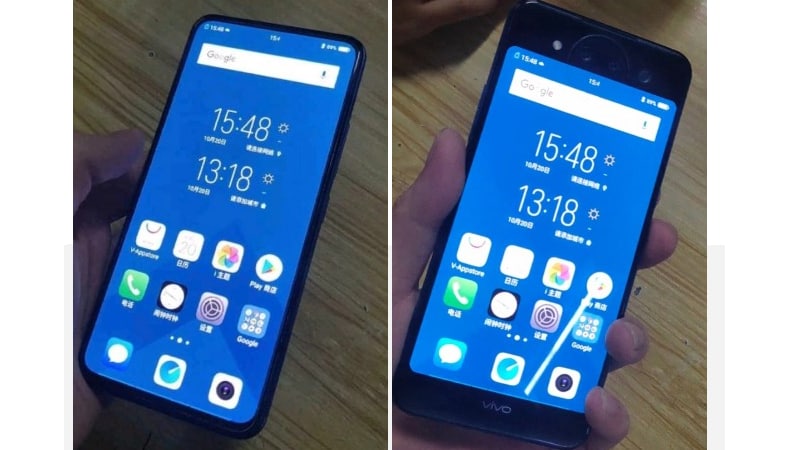 The Vivo Nex series first launched in June this year, and now leaks of its successor have already started to crop up. In case you've forgotten, the Vivo Nex grabbed a lot of headlines for its true full-screen display and its motorised pop-up selfie camera setup. Now, the successor Vivo Nex 2 has been leaked in images, and it seems that the Chinese giant has taken a leaf out of ZTE's sub-brand Nubia's notebook, and has decided to put a second display on the back of the smartphone - similar to what Nubia did on the Nubia X smartphone.

The Vivo Nex 2 images have leaked on Weibo and the photos show the smartphone from the front and back. The front is an all-screen bezel-less display with little to no chin on all sides. At the back, there is a triple camera setup up top, and a display on the rest of the rear real estate. This means that users don't need two camera setups at the front and back to take selfies or portraits. With two screens, users can just flip the device and take a selfie with the rear camera itself.

The prospects are quite exciting; however durability issues are plentiful at face value. It remains to be seen whether this is just one of the prototypes that will never see the light of the day, or Vivo will take a bold step and launch it commercially.

As mentioned, the design of the Vivo Nex 2 appears to be heavily inspired from the Nubia X which also sported dual screens. The smartphone was launched last month in China, and is priced starting at CNY 3,299 (roughly Rs. 35,000). Apart from the images, little else is known of the Vivo Nex 2 as of now. If Vivo continues the trend of a bi-monthly launch cycle, we may see the smartphone launch really soon.