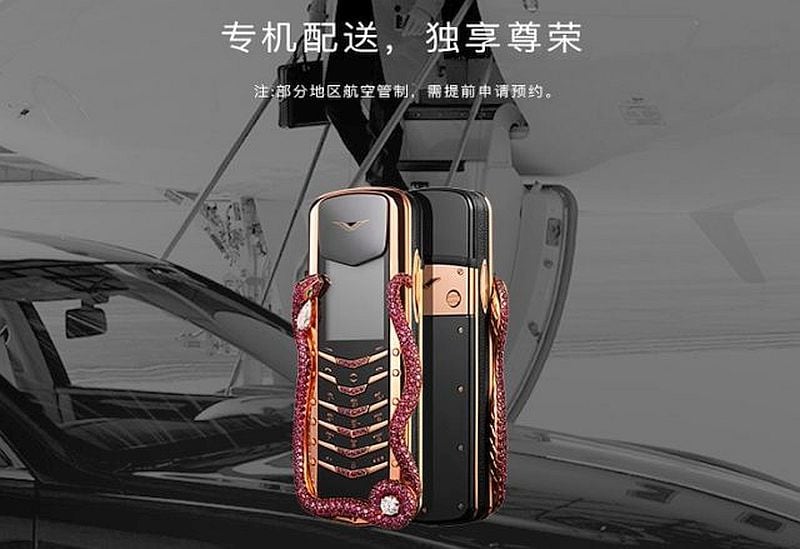 Vertu, the luxury phone brand reportedly bought by an exiled Turkish businessman, has unveiled a new limited edition feature phone, the Signature Cobra. The new Vertu Signature Cobra Limited Edition has been launched at an exorbitant CNY 2.47 million (nearly Rs. 2.3 crores) and will be available online via a Chinese e-commerce platform.

The Vertu Signature Cobra will be available to buy after a down payment of the CNY 1,000 (roughly Rs. 10,000) after which interested users will have to pay the rest of the amount upfront. In a first, the Vertu feature phone will be delivered to consumers by a helicopter which doesn't seem too surprising considering the price of the handset.

The biggest highlight of the Vertu Signature Cobra feature phone is it has been designed by a France-based jewellery brand, Boucheron. Some of the other highlights of the new Vertu phone include the 439 rubies it has, fitted in a cobra design. As the name suggests, the phone features a cobra design around the front and the eyes pack 2 emerald stones. The new Vertu phone is also said to come with other gems. In terms of design, the new Vertu Signature Cobra closely Limited Edition follows design cues of the original Signature phone.

According to GizChina report, the new Vertu phone features 388 different parts and has been assembled in the UK. The phone is said to be assembled with hands for precision.

HP Leads PC Market Growth in India, Says IDC
This Is the First Official Nintendo Switch Game Up for Pre-Order in India