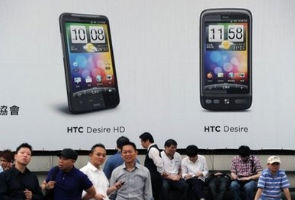 Net profit for the January-March quarter surged to New Taiwan dollars 14.8 billion ($510 million), up 197 percent from a year earlier. Revenue totaled NT$104 billion in the first quarter, up 174 percent from the year before.

HTC has grown on the strength of its design and production of handsets based on Google Inc.'s Android operating system.

It said U.S., European and Asian markets responded well to the five new smartphones HTC introduced in the first quarter, contributing to the better-than-expected revenue.

HTC expects shipments to grow to 11 million in the second quarter and will market more new products during the period, including a 7-inch tablet computer and a 4.3-inch 3D handset, said Joey Cheng, director of investor relations.

The new handset will allow users to create 3D content as well as watch 3D films without wearing special glasses, he said.

To meet increasing market demand, HTC plans to invest $96 million to build a new factory in Taiwan, the company said in a statement.

HTC had earlier announced that it would double monthly capacity at its Shanghai factory to 2 million handsets and would outsource production if necessary.