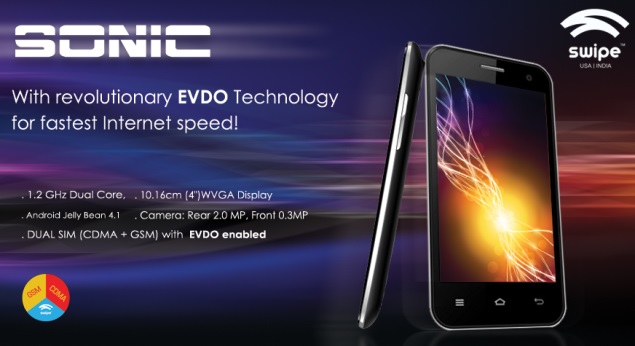 The Swipe Sonic smartphone is now available at an e-commerce website for Rs. 7,399, and has also been listed on the company's official site without word on pricing and availability. It offers dual-SIM (GSM+CDMA) functionality with dual standby and supports EVDO technology for data.

The Swipe Sonic sports a 2-megapixel rear camera with LED flash, while there is also a 0.3 megapixel front-facing camera. The new Swipe handset supports up to 32GB expandable storage via T-Flash card, though there is no word on inbuilt storage.

The Swipe Sonic smartphone has been listed on Shop Clues.

The tablet is powered by a 1.3GHz quad-core processor (unspecified chipset) along with 1GB of RAM. It comes with 4GB inbuilt storage which is further expandable up to 32GB via microSD card. The Swipe MTV Slash 4X tablet sports a 2-megapixel rear camera with flash and also includes a 0.3-megapixel front-facing camera.

Mobiles launched in February 2014
Affiliate links may be automatically generated - see our ethics statement for details.