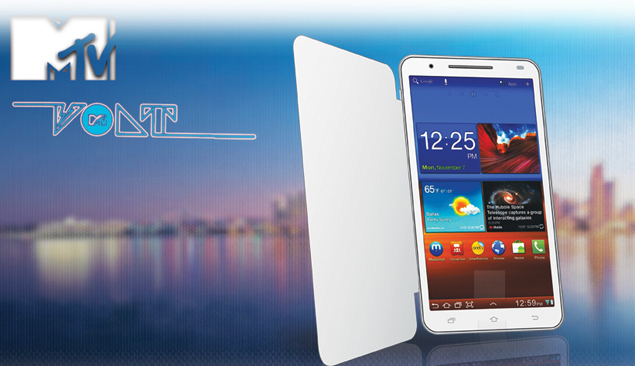 California-based Swipe Telecom has launched an Android smartphone-tablet-hybrid in partnership with MTV India. Dubbed as the MTV Volt, the device is priced at Rs. 12,999. It's safe to say that this is the third such device in the market that will be competing head on with the recently launched Byond Phablet PIII and the Karbonn A30.

Unlike its competitors, which come with Android 4.0, the device runs on Android 4.1 Jelly Bean out of the box. The device comes with an 8-megapixel rear camera with LED flash and a 1.3-megapixel front facing camera too.

Under the hood, this beast is powered by a 1GHz dual-core MTK 6577 processor with 512MB DDR3 RAM. There's 4GB of internal storage that can be expandable by another 32GB via microSD card. The device also has an inbuilt TV-player that offers on-the-go access to MTV and also features FM Radio with FM Transmitter.

"MTV VOLT is a 'made to order' product for the generation that's constantly communicating, entertaining and socializing. With features that address their needs and price-point that suits their pockets, we're confident about MTV VOLT by Swipe, to generate a great response," Sandeep Dahiya, senior vice president and business head - consumer products - Viacom18, said.

He further added, "We have a two year licencing deal with Swipe and we will introduce 8-12 devices ranging from phones to phablets to tablets in the price range of Rs 6,000 to Rs 20,000."

The device will be available across multiple retail outlets in India, the Swipe e-store and with leading online portals as well.

Shripal Gandhi, founder and chief executive of Swipe Telecom said."We are in a category with a tremendous aspirational value. The MTV Volt promises to be a perfect muse for tech enthusiasts of 'generation next'. In partnership with MTV, we will be launching an array of revolutionary products over the next few quarters, which will be truly disruptive."