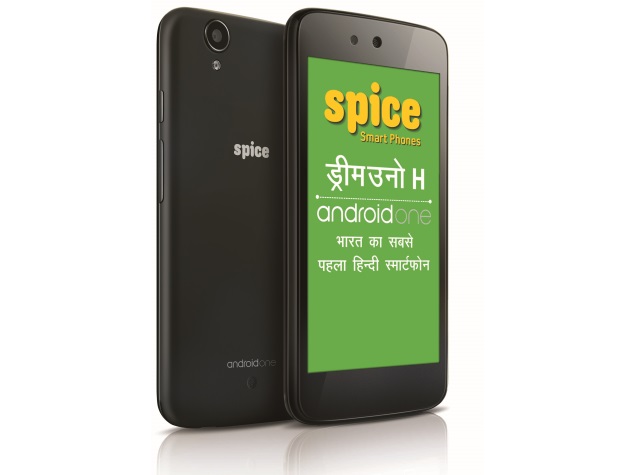 Spice has launched a variant of its Dream Uno Android One smartphone, called the Dream Uno H, which comes with complete Hindi language support.

The Spice Dream Uno H has been launched at a market operating price (MOP) of Rs. 6,499, and unlike the Flipkart-exclusive original variant will be available through major retail stores (online and offline) in the country.

Focusing on the significant Hindi speaking population in the country, the variant of the Spice Dream Uno features a complete Hindi keyboard along with voice input and Hindi app versions of the popular Google services such as Chrome, Search, YouTube and Google Maps among other apps.

The company stressed that the dual-SIM Dream Uno H has been especially designed for the 300 million Hindi speaking people and the handset is targeted for users in states such as Uttar Pradesh, Haryana, Rajasthan, Madhya Pradesh, and Bihar.

Notably, the Android 4.4.4 KitKat-based Dream Uno H comes with the same specifications as the Dream Uno, and features a 4.5-inch FWVGA display; a 1.3GHz quad-core processor; 1GB of RAM; a 5-megapixel rear camera with LED Flash; a 2-megapixel front camera; 4GB of inbuilt storage; expandable storage support via microSD card (up to 32GB), and a 1700mAh battery. The Dream Uno H also comes preloaded with some Hindi apps such as Sony Live, Hungama, Spice Cloud, Google Translate, and AajTak.

Commenting on the launch, Prashant Bindal, Chief Executive Officer, Spice Mobility Ltd, said, "We firmly believe that this revolutionary phone will contribute immensely in connecting the 300 million Hindi speaking masses to the internet with its useful applications such as Google Search, YouTube and Google Maps. After successful launching the Android One with Google in September this year, this is our next step towards making smartphones more accessible to the Hindi speaking population in the country."

Caesar Sengupta, VP, Product, Google, said, "We are excited by the launch of the second Spice Android One smartphone, this time targeting Hindi users. This is another step in empowering the next billion people."