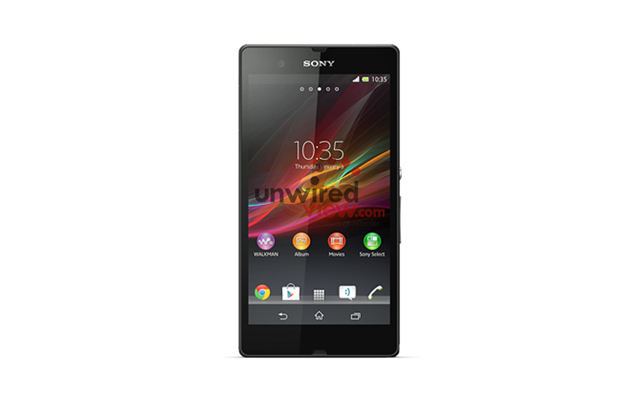 Last week we reported that the Sony C660X Yuga will release as the Sony Xperia Z at CES 2013.

Now Unwired View has caught hold of what appears to be a press shot of the Jelly bean-powered Xperia Z. Earlier codenamed Yuga, the smartphone sports a full-HD display and will be competing with the likes of the yet-to-be-launched Huawei Ascend D2 and HTC Droid DNA. Some other full-HD smartphones already launched are the Nubia Z5, HTC J Butterfly and the Samsung Galaxy S IV.

From the looks of it, the smartphone has a design similar to the Xperia T and Xperia SL smartphones. However, the transparent band seen in most Xperia phones at the bottom is missing and so is the Xperia branding itself. The Sony logo is seen at the top.

Specs wise, the Xperia Z reportedly sports a 5-inch 1080p (1920 x 1080 pixels) display at 440ppi with Sony's Mobile Bravia Engine and runs on Android 4.1.1 Jelly Bean. It is powered by a Qualcomm Snapdragon S4 Pro quad-core processor with 2GB RAM and 16GB internal storage, which is expandable by another 128GB.

Sony is expected to hold a press conference on January 7th at CES 2013 where we'll know more official details of the Xperia Z.

Apart from the Xperia Z, the company is also likely to unveil the Xperia X aka Sony C650X Odin. It is expected to be a dual-SIM version and thicker as well as heavier than the Xperia Z.

There are also rumours of another mid-range Android smartphone from Sony, the C5303 codenamed HuaShan. Mentioned a few days ago by the Xperia blog, the device apparently will be part of a C530X series, alongside the C5302 and C5306. Many countries could witness the launch of the device including China. Looks like we will have to wait it out until CES 2013.