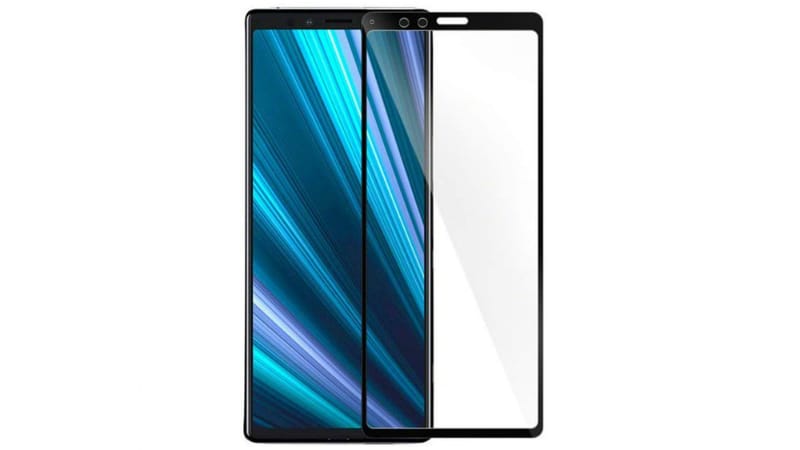 Sony Xperia XZ4 is now in the news thanks to a leaked screen protector. The Xperia XZ4 is speculated to be the successor to the Xperia XZ3, and it now appears it may debut with an ultra-large display panel - something that's been tipped before. Images reportedly showing the screen protector of the Xperia XZ4 phone have appeared online and they indicate just how big the screen of the phone will be. The screen protector suggests that the new Sony phone will be a little taller than the Samsung Galaxy Note 9 and Huawei Mate 20 Pro phones. Further, it can be seen that handset is missing a display notch, something that has become quite common nowadays. A couple of images purportedly showing the back of the Xperia XZ4 have also been leaked from China.

The alleged screen protector of the Sony Xperia XZ4, which was leaked in a couple of images on Weibo, shows its oddly tall display panel. The screen protector also doesn't include any signs for a display notch to provide a nearly edge-to-edge, full-screen experience. However, it does confirm the presence of thin bezels.

The absence of the display notch in the Xperia XZ4 confirms that the smartphone will come with an earpiece as well as its camera sensor and an LED notification light - all just on top of its screen – and very similar to the Samsung Galaxy Note 9.

Further, one of the leaked images shows that that the screen protector matches the screen size of the Xperia XZ4 render. The render looks very similar to one that had surfaced last month.

Apart from the front, a couple of images separately showing the back of the Sony Xperia XZ4 have also appeared online. These images have been leaked by the same source and essentially show a protective case. The pictures reveal that the smartphone will sport a triple camera setup along with an LED flash module on the back.

On the right side, the images show a volume rocker, fingerprint scanner, and a power/ lock key. There is also a fourth key that could be a dedicated camera shutter button, similar to many other Sony Xperia models. Furthermore, the bottom area is occupied by a speaker grill, USB Type-C port, and a pinhole microphone.

None of the newly leaked images show the presence of a 3.5mm headphone jack on the Sony Xperia XZ4, which is not surprising as a large number of smartphone models in the current market have already ditched the traditional tech to favour USB Type-C.

The Sony Xperia XZ4 is rumoured to debut with a 6.55-inch display and come with a Qualcomm Snapdragon 855 SoC. The handset could be officially unveiled at CES 2019 in Las Vegas later this month. The same event may also be used to launch the new Xperia XA3, Xperia XA3 Ultra, and Xperia L3 models.

To recall, Sony had launched the Xperia XZ3 at IFA 2018 back in late August last year. The handset debuted with Android Pie and has a Snapdragon 845 SoC. While the original variant had 4GB of RAM, the phone received a new 6GB RAM variant in Taiwan a few months ago.