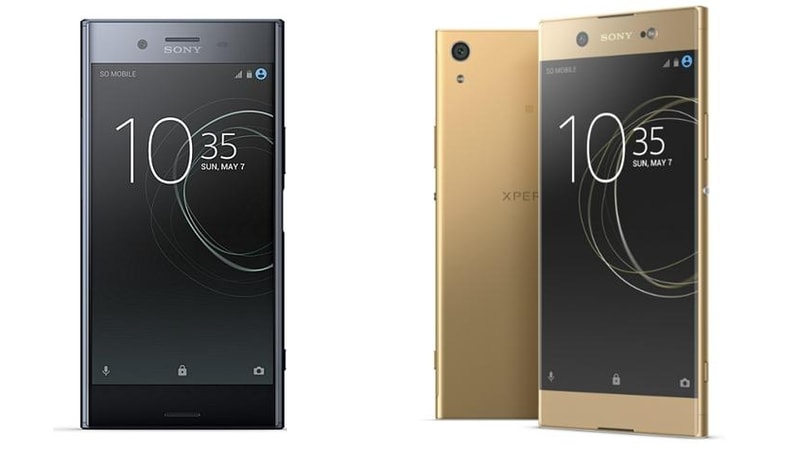 The Sony Xperia XZ Premium sports a 5.5-inch Triluminos HDR display with a 4K (2160x3840 pixels) resolution. It is powered by a Snapdragon 835 SoC, paired with Adreno 540 GPU and 4GB RAM. It offers 64GB of inbuilt storage with the option to expand further via a microSD slot (up to 256GB).

The new Xperia XZ Premium on the rear has a 19-megapixel sensor with Sony's new Motion Eye camera system (based its new memory stacked 1/2.3-inch Exmor RS CMOS sensor) that provides 5x faster image scanning and data transfer. This means you can create videos by recording in 960 frames per second, providing Super slow motion video playback that is apparently four times slower than other smartphones in the market. There's also a 13-megapixel front camera with 1/3.06-inch Exmor RS sensor for selfies.

The Sony Xperia XA1 Plus is a mid-range smartphone compared to the Xperia XZ series, but still has specifications such as a 23-megapixel camera, wide-angle 8-megapixel front-facing camera, and Sony ClearAudio+ sound technology. It will be available in White, Black, and Gold colours. It is powered by a 64-bit octa-core MediaTek Helio P20 SoC (four clocked at 2.3GHz and rest four at 1.6GHz) coupled with 4GB of RAM and Mali T-880 MP2 GPU for graphics. It packs a 5.5-inch Full-HD (1080x1920 pixels) display.

The rear camera sports a 23-megapixel Exmor RS sensor with hybrid autofocus and 24mm wide-angle f/2.0 aperture lens. The smartphone has an 8-megapixel selfie camera with 23mm f/2.0 aperture lens that is capable of taking low-light photographs at an ISO3200. The smartphone has a 32GB of inbuilt storage that can be expanded further via a microSD card (up to 256GB). The Sony Xperia XA1 Plus packs a 3430mAh battery under the hood with Quick Charge 2.0+. It measures 155x75x8.7mm and weighs 190 grams.

The big highlight of Sony Xperia XA1 Ultra is the cameras at the back and front. At the rear, there is a 23-megapixel Exmor RS image sensor with hybrid autofocus, 24mm wide-angle lens, f/2.0 aperture, 5x zoom, and HDR mode. The Sony Xperia XA1 Ultra bears a 16-megapixel Exmor RS sensor at the front with front flash, 23mm wide-angle lens, f/2.0 aperture, OIS, and autofocus. The battery is a 2700mAh, and the smartphone runs on Android 7.0 Nougat. Connectivity options include LTE (4G), LTE Cat6/4, GSM GPRS/EDGE (2G), and UMTS HSPA+ (3G).

Care About Digital Privacy? Then Prove It
Nokia X High-Resolution Images Leaked by Chinese Retailer Ahead of May 16 Launch