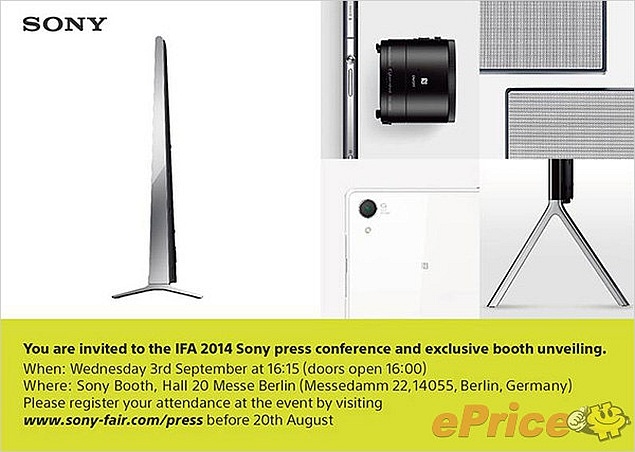 While Samsung has confirmed its Unpacked 2014 Episode 2 event scheduled for September 3, Sony is reportedly also hosting an event on the same day ahead of the IFA 2014.

A tipster has leaked Sony's alleged press invite for a pre-IFA 2014 event, an invite that suggests a range of new devices will be unveiled on September 3, with images of what may be more than one smartphone, a lens camera, speakers, a television, and some sort of stand. The invite is captioned "You are invited to the IFA 2014 Sony press conference and exclusive booth unveiling."

Along with the leaked invite, the tipster also reported (via GSMArena) that Sony might be unveiling a new 4K TV, and new QX series of lens cameras, along with the much-rumoured Sony Xperia Z3 and Xperia Z3 Compact smartphones.

Last month, XperiaBlog claimed to have received confirmation of the same dates for Sony's pre-IFA 2014 event. The report claimed it to would be held two days ahead of the IFA 2014 tradeshow in Berlin, which starts on September 5 and ends on September 10.

The report had also suggested that the Sony will also unveil some 'new wearables such as the SmartWatch 3 and the latest iteration of lens-style cameras' along with theanticipated Xperia Z3 and Xperia Z3 Compact smartphones.

The specifications were tipped by the popular phone tipster @evleaks, along with images showcasing the rear and side profile of the alleged Xperia Z3. It claimed that the next Sony flagship, expected to be called the Xperia Z3, will come with model number D6653. Notably, the Xperia Z2 (Review | Pictures) comes with model numbers D6502, D6503, and D6543 for the various 3G and 4G models.

Leaked specifications of the anticipated Xperia Z3 so far include a 5.5-inch full-HD display; a quad-core Qualcomm Snapdragon 801 processor clocked at 2.4GHz; 3GB of RAM; 16GB of inbuilt storage; a 20.7-megapixel rear camera; a 2.1-megapixel front camera, and Android 4.4.4 KitKat.

Previously, the anticipated Sony Xperia Z3 Compact was tipped by an XDA developer from India, suggesting its model number to be D580x. The purported specifications included a 4.5-inch 720x1280 pixel display; a quad-core 2.5GHz Snapdragon 801 MSM8974AC processor; an Adreno 330 GPU; 2GB of RAM; a 20.7-megapixel rear camera, and a 2.1-megapixel front-facing camera.
Affiliate links may be automatically generated - see our ethics statement for details.
Comments