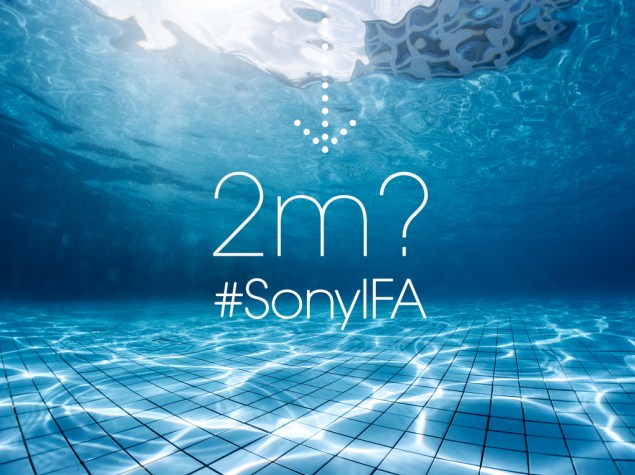 After an official video teaser last week, Sony on Sunday has released another teaser image on its official UK Twitter account.

The underwater image posted on Twitter by Sony UK is of a swimming pool, with an arrow pointing to 2 metres with a question mark. The tweet says, "We'll be getting deep at #IFA2014. But how deep..? #SonyIFA," suggesting at least one of the anticipated devices can even withstand immersion in up to 2 metres of water.

We'll be getting deep at #IFA2014. But how deep..? #SonyIFA pic.twitter.com/elDGs2wXfl

Last month, Sony had launched the Xperia M2 Aqua smartphone touting its improved waterproof technology. The company claimed it to be the highest dust-proof and waterproof rating (IP65/68) in a smartphone, which is said to be able withstand immersion in up to 1 metre of water indefinitely.

So far, Sony is rumoured to launch three smartphones, two wearables, and a tablet at IFA 2014. Along with the previously rumoured Xperia Z3, Xperia Z3 Compact and Xperia Z3 Tablet Compact devices, a new report on Monday tipped the list to include SmartWatch 3 and SmartBand Talk wearables, and a budget offering dubbed Xperia E3, which could retail between $200 (approximately Rs. 12,000) and $300 (approximately Rs. 18,000).

The unannounced Xperia E3 is tipped to feature a 4.8-inch 720x1280 pixels (HD) display; a 1.2GHz quad-core Snapdragon 400 processor, between 1.5GB to 2GB of RAM, according to the report. Additionally, it will not be a water-resistant device.

The unannounced Sony SmartWatch 3 is said to run Android Wear, and feature a 1.68-inch 320x320 pixels display and an IP58 rating indicating some amount of water-resistance. On the other hand, the SmartBand Talk is said to feature an E-Ink display, as well as Bluetooth connectivity to displays notifications when paired with a smartphone.
Comments