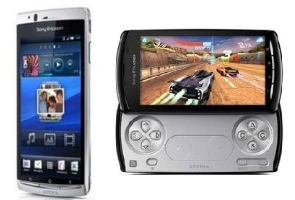 Highlights
Sony Ericsson has added to its Xperia smartphone lineup in India with the launch of the Xperia Arc and the Xperia Play in India for Rs. 32,000 and Rs. 35,000 respectively.

Lets start with the self-proclaimed gaming smartphone: The Xperia Play.

Under the hood, the Xperia Play runs on a 1GHz Qualcomm MSM8655 CPU with Adreno 205 GPU and 1GB ROM. The device has a 4-inch capacitive touchscreen display with a resolution of 854x480 pixel and internal storage of 400MB expandable to 32GB via a micro SD card. The rear of the device houses a 5MP camera with LED flash. The Xperia Play will come preloaded with 6 games and 70 games will be available for download via the PlayStation Pocket Store.

Although the device has a strong lineup of games, it's the hardware configuration that is a little disappointing. While the world is moving to dual core processors in smartphones, the Xperia Play still has a single-core processor. The battery life too is a bit disappointing as the company claims 3.5 hours of juice when the device is used solely for gaming.

Being a gaming phone it sacrifices phone ergonomics in favour of the normal phone. The headphone and charging jacks are placed in a way that they are best used while gaming - while using it as a phone or a music player, the placement does not seem to be as good. The volume rocker has also been displaced to give way to the L/R buttons of the game controller.

Does the device justify a price tag of Rs. 35,000? Take a look at our video review to find out.

The Xperia Arc on the other hand is just 8.7mm thin at its slimmest point. The device boasts of a 1GHz Qualcomm MSM8255 CPU with Adreno 205 GPU, Android 2.3 Gingerbread OS, a 4.2-inch BRAVIA engine reality capacitive touch-screen display with a resolution of 854x480 pixels.

The Xperia Arc is a stunning device if viewed as a standalone product. But compare it to the current market offerings and you have better options out there at better price points. LG has recently launched the Optimus X2 that boasts of a NVIDIA Tegra 2 Dual core processor and Android 2.2 upgradable to 2.3. The camera on both the devices too has an 8MP censor. The Arc however has a larger screen by 0.2-inches and boasts of Sony's BRAVIA technology.

Both the Xperia Arc and the Xperia Play boast of Sony Ericsson's custom built UI called Timescape that integrates all your social media, messaging and communication under one app.
Comments