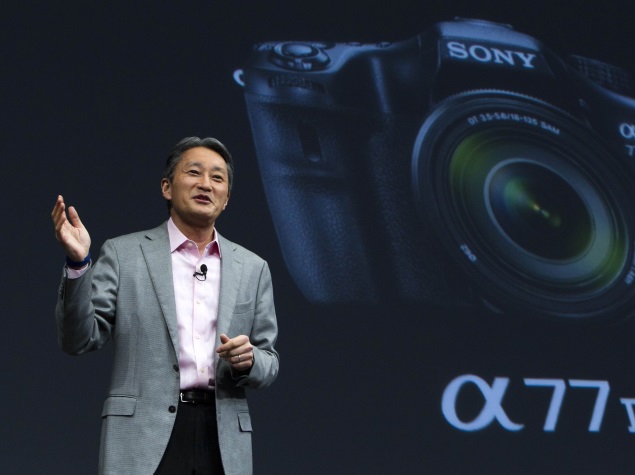 Sony Corp CEO Kazuo Hirai has weathered a crisis over a cybe-rattack on its Hollywood studio and its controversial comedy "The Interview", but his toughest moment may be just arriving as he prepares a new business revival plan.

After failing to turn around the storied creator of the Walkman since taking the helm in April 2012, Hirai and his deputies are now open to options including sales and joint ventures for its money-losing TV and mobile phone operations, company officials familiar with the leadership's thinking say.

Sony, which has cut its earnings forecasts six times on Hirai's watch, forecasts a 230 billion JPY ($1.9 billion, roughly Rs. 11,804 crores) net loss for the business year to March, and will suspend dividend payments for the first time, after deep smartphone losses.

Sony management recognises that "no business is forever", one source told Reuters. Although no deals are on the table, "every segment now needs to understand that Sony can exit businesses", he added.

Last year Sony sold its Vaio personal computer business and spun off its TV operations, cutting 5,000 jobs in addition to the 10,000 slashed earlier after Hirai took over.

But even as many analysts say further drastic action is needed, such as a full-fledged exit from TVs, Hirai used last week's high-profile Consumer Electronics Show (CES) in Las Vegas to push an array of new gadgets, including a super-slim TVs and a $1,100 Walkman digital-music player.

He stressed the success of Sony's imaging sensors for cameras and its PlayStation 4, saying the company has sold 18.5 million of the game consoles, putting it ahead of Microsoft Corp's Xbox One and Nintendo Co's WiiU.

Sony has refused proposals for aggressive action before, such as a 2013 demand from influential hedge fund manager Daniel Loeb to spin off part of its profitable entertainment business to fund an overhaul of the struggling electronics operations.

'Drastic reforms'
As he prepares the latest revival plan ahead of the new business year, Hirai, 54, must decide what to do with the financially weak operations that have already been subject to heavy cost cuts.

He told a small group of reporters at the Las Vegas show that his reforms have succeeded "in some parts but not in others".

"Electronics in general, along with entertainment and finance, will continue to be an important business," he said. "But within that there are some operations that will need to be run with caution - and that might be TV or mobile, for example."

"The mobile and TV businesses both require a drastic overhaul," he said. "Without drastic reforms such as joint ventures or alliances, they will both be in the red three years from now."

Exiting the TV business would mean heavy restructuring costs and lost sales. Potential buyers might not want all the division's assets, let alone at a high premium.

But Japanese rival Panasonic Corp has succeeding in shifting focus from TVs and DVD players to growth areas such as advanced driver-assistance systems and high-margin home appliances under CEO Kazuhiro Tsuga, who took office around the same time as Hirai.

"Anyone can make TVs these days," Tsuga said after browsing rival booths at CES. "But you see this in smartphones too, not just TV."

Indeed, Sony expects a 180 billion yen impairment charge for its mobile phone business after struggling to compete with cut-price Asian rivals and failing to close the gap with Apple Inc and Samsung Electronics Co in high-end smartphones.

The same predicament forced Nokia to sell its mobile phone business to Microsoft and Sony's former JV partner Ericsson to sell its stake in 2012.

GM Open to Working With Google on Self-Driving Car Technology
What You 'Like' on Facebook May Reveal Your True Personality: Study