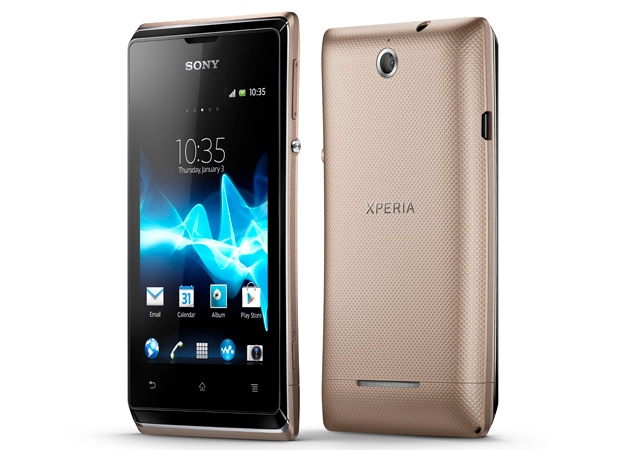 The Sony Xperia E sports a 3.5-inch HVGA touchscreen and single-core 1GHz Qualcomm Snapdragon MSM7227A processor, 512MB of RAM, 4GB of internal storage and 1,500 mAh battery that can provide a talk time of up to 6.3 hours, or a stand-by time of up to 530 hours. The storage can be expanded to up to 32 GB via microSD card. The smartphone also has a 3.2-megapixel rear camera with auto-focus.

Sony revealed that a dual-SIM (GSM+GSM) version of this smartphone, called Xperia E dual, will also be made available. Sony Xperia E will run on Android 4.1 Jelly Bean but the Xperia E dual will come pre-loaded with Android 4.0 Ice Cream Sandwich, and will be upgradable to Android 4.1.

Another difference between the two smartphones is that Sony Xperia E will be available in black, white and pink colours while the Xperia E Dual will be seen only in black and gold.

According to Sony the differentiating factor for these smartphones will be HD Voice, which makes phone calls clearer than ever before and its noise cancellation feature that filters out background noise.

"Consumers looking to take their first steps into the world of Xperia smartphones would be well advised to look at Xperia E or Xperia E dual. They are perfect for those seeking affordable access to the quality and functionality more traditionally associated with high-end Android smartphones," said Calum MacDougall, Director Xperia Marketing at Sony Mobile Communications.

As of now Sony has given no indication on the pricing of this smartphone but has shared that it will be available in Q1 2013.

Sony Xperia E seems to be much on the lines of recently launched Sony Xperia tipo and Xperia tipo dual smartphones. Xperia tipo (Review I Pictures) dual is dual-SIM (GSM+GSM) version of Xperia tipo, which is available in India for Rs. 10,449.

Both Sony Xperia tipo and Xperia tipo dual smartphones sport a 3.2-inch TFT display with 480x320 pixel resolution and run on Android 4.0. There is 800MHz Qualcomm Snapdragon processor on-board along with 512MB of RAM. The smartphones come with 2.5GB internal storage and can be expanded up to 32 GB via microSD. Sony has tied up with Box to offer 50GB of cloud storage for life with the purchase of these Xperia smartphones.