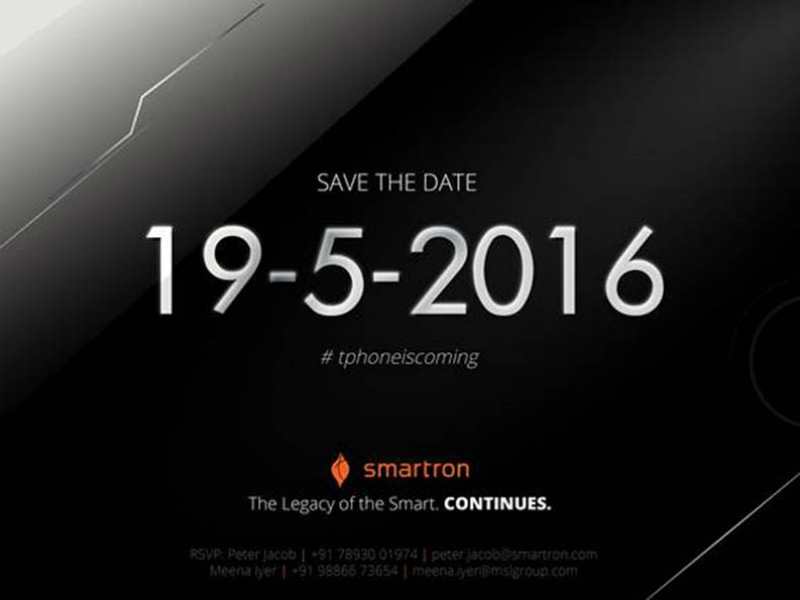 IoT startup Smartron has sent out media invites for the launch of its upcoming smartphone t.phone in India. Smartron unveiled the t.phone in April alongside the launch of the t.book, but never revealed its complete specifications, pricing, or availability. The smartphone will now be launched on May 19.

Smartron is an IoT startup founded in 2014 by Mahesh Lingareddy. This little known startup grabbed headlines this March after Sachin Tendulkar invested an undisclosed sum in the company. Thereafter, he was anointed as the brand ambassador for Smartron.

In the same month, Smartron launched the t.book, a hybrid Windows 10 computing device in India. The t.book was sold exclusively on Gadgets 360 for Rs. 39,999. The company has also announced on its website that it will soon be opening an online portal named t.store to sell all of its products through one domain.

Information about the t.phone is scarce at the moment, though the company had claimed it was going to be the lightest 5.5-inch smartphone in the world.

As for the Smartron t.book, the company is touting the design and hardware specifications. The laptop-tablet hybrid, which sports a aluminium and magnesium body, features a flip-stand and keyboard. The company says the t.book can last for 10 hours on a single charge. It sports a 12.2-inch WQXGA (2560x1600 pixels) IPS display, and is powered an Intel Core M processor coupled with 4GB of LPDDR3 RAM.