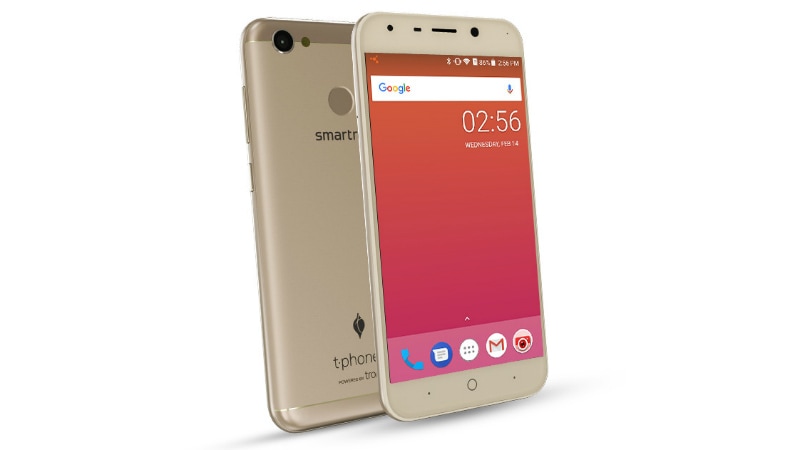 Smartron t.phone P Gold Edition has been launched in India. The new model by Smartron is the Gold variant of the t.phone P that debuted in January. It comes with a price tag of Rs. 7,999 and will go on sale on through Flipkart on April 22 at 11:59pm. The company has roped music composer Bappi Lahiri to start promoting the new launch on social media.

Customers buying the Smartron t.phone P Gold Edition will get a 1TB of free tcloud storage. Also, the smartphone has a gold paint job that distinguishes its build with that of the original t.phone P.

Specification-wise, the Smartron t.phone P Gold Edition is identical to the original t.phone P. The smartphone dual-SIM (Nano) t.phone P Gold Edition runs Android 7.1.1 Nougat and features a 5.2-inch HD (720x1080 pixels) IPS display. Under the hood, there is an octa-core Qualcomm Snapdragon 435 SoC, coupled with 3GB of RAM. The smartphone sports a 13-megapixel camera sensor on the back with an f/2.2 aperture lens and an LED flash, while a 5-megapixel camera sensor is available on the front with a fixed-focus lens that has an f/2.2 aperture. There is also a low-light flash that sits alongside the selfie camera and features such as Beautify, HDR, Panorama, Time Lapse, Burst mode, and Wide Selfie.

The t.phone P has 32GB of onboard storage that is expandable via microSD card (up to 128GB). On the connectivity front, the smartphone has 4G VoLTE, Wi-Fi 802.11 b/g/n, Bluetooth v4.1, GPS/ A-GPS, and Micro-USB with OTG support. Sensors on board include an accelerometer, ambient light sensor, gyroscope, and a proximity sensor. The handset also includes a fingerprint sensor on the back that doubles as a camera shutter button and can even be used to answer calls with just one tap. Besides, there is a 5000mAh battery that is claimed to deliver more than two days of power on a single charge. The battery pack is also notably capable of charging other devices such as smartphones, smartbands, and Bluetooth speakers via OTG support.