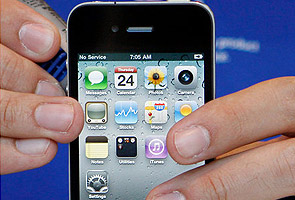 Highlights
Sales of smartphones such as Apple's iPhone4 are set to top 100 million units for the first time this year in the Asia Pacific market -- excluding Japan, an industry analyst said on Thursday.

Smartphone sales are projected to hit 137 million units in 2011, up from nearly 84 million last year, the technology industry research company IDC said in a statement.

"Smartphones were a hot item in 2010, with more than double the shipments of 2009," said IDC analyst Melissa Chau, adding that the growth came from the region's more developed markets such as South Korea.

"In 2011, IDC expects this fire to keep burning as mobile phone vendors race to get consumers on higher-margin devices, operators look to pull up revenues on mobile data, and mobile platform stakeholders battle to woo app developers," Chau said.

'Apps' refers to 'applications' that allow smartphone users to do a range of activities through their mobile phones including sharing pictures, playing games or checking their bank accounts.

In addition to operating as a telephone, smartphones allow users to send and receive emails, access Facebook and Twitter accounts, download movies, music and books and perform multiple other functions while on the go.

By 2015, three in five phones sold in the region will be smartphones, up from one in five in 2010, IDC said.
In the face of the smartphones onslaught, feature phones -- or devices that perform the basic functions -- still held their ground.

Sales of feature phones grew 17 per cent in 2010, driven by low-end brands priced below $100 from China, India and other countries, IDC said.
Comments