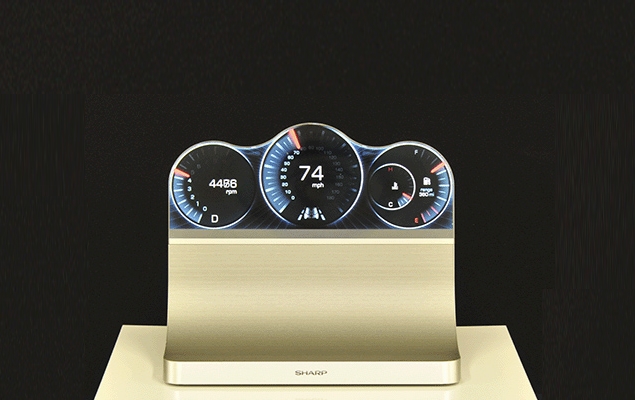 We might finally see new form-factors in screens that break away from the conventional square and rectangular screen shapes. Sharp has showed off its 'Free-Form Display' prototype which it claims could enable creation of new display designs in the near future.

The company notes that its new 'Free-Form Display' prototype will offer slim profiles, is lightweight, and can have thin bezels. Sharp claims that its prototype display utilises IGZO technology and the company's proprietary circuit design methods. The company has not revealed any specific time frame but has noted that it plans to enter the mass-production stage for the Free-Form Displays at the earliest.

The Japanese electronics giant in a press note said, "Sharp announces the development of the Free-Form Display, a device that can be shaped to meet a wide range of user needs thanks to the incorporation of IGZO technology and proprietary circuit design methods. Conventional displays are rectangular because they require a minimal width for the bezel in order to accommodate the drive circuit, called the gate driver, around the perimeter of the screen's display area. With the Free-Form Display, the gate driver's function is dispersed throughout the pixels on the display area. This allows the bezel to be shrunk considerably, and it gives the freedom to design the LCD to match whatever shape the display area of the screen needs to be."

Earlier this month, a report suggested that Japan began testing broadcasts of satellite television programmes in 4K resolution. The report said that the major firms including Sony and Sharp are betting on the super high-definition technology to rescue their embattled TV units.