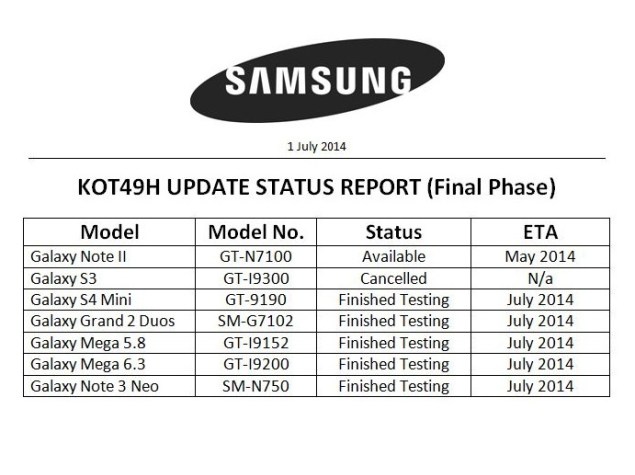 Samsung might soon roll-out an Android 4.4.2 KitKat update for five of its older handsets this month, if a leaked update schedule is to be given credence. The handsets in question are the Samsung Galaxy S4 Mini, Galaxy Grand 2 Duos, Galaxy Mega 5.8, Galaxy Mega 6.3, and Galaxy Note 3 Neo.

As per a leaked document acquired from an insider from India (via Just About Phones), Samsung has finished testing the Android 4.4.2 KitKat OS on the above mentioned Galaxy devices.

It is being speculated that the estimated date arrival of the Android 4.4.2 update mentioned for the various Galaxy smartphone refers to India. The credibility of the leaked document image is also yet to be confirmed.

In addition, the model numbers for the Galaxy Grand 2 and the Galaxy Mega 5.8 (SM-G7102 and GT-I9152, respectively) indicate the dual-SIM variants of the handset. It is unclear whether the single-SIM variants will receive the Android 4.4.2 KitKat update or not.

The leaked document image also indicates that while the Samsung Galaxy Note II update for Android KitKat is already available as reported in May, the international Galaxy S3 (GT-I9300) would not receive the update like rumoured in February.

Another document leaked last month indicated the Android 4.4.3 KitKat OS update will be arriving on the Galaxy S4 and Galaxy S5 in the next few months.