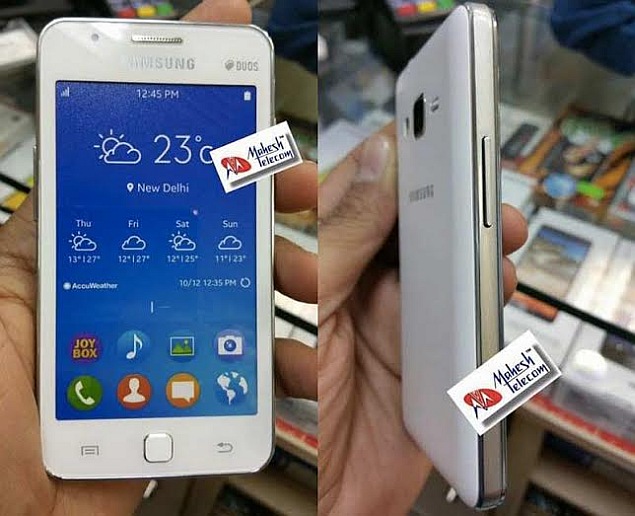 Mumbai-based retailer Mahesh Telecom, which has a long track record of accurate leaks, posted images on Facebook showing the smartphone along with its price and slightly changed list of specifications. The retailer also said that the smartphone will be in stock as soon as tomorrow. Unfortunately, the post was pulled soon after.

As previously tipped by an unnamed Samsung executive, the price of Samsung Z1 (Z130H) is said to be Rs. 5,700. While most of the specifications mentioned are the same, there have been some minor changes in the new list of specifications. The handset now features a 3.1-megapixel rear camera instead of 3.0-megapixel. Also, the Z1 will now feature Bluetooth 4.1 and not version 4.0 as mentioned before. The 1GB of RAM has been changed to 768MB of RAM. Storage expandability via microSD card is up from 32GB maximum to 64GB.

Images and specifications of the dual-SIM Samsung Z1 were tipped by the same retailer earlier, claimed to have been sourced from a Samsung partner event in Mumbai. The dual-SIM Samsung Z1 will run on Tizen 2.3 OS and feature a 4-inch WVGA (480x800 pixels) display; a 1.2GHz dual core processor coupled with 1GB of RAM; a 3-megapixel rear camera; a 0.3-megapixel front camera with f/2.4 aperture; 4GB of inbuilt storage expandable via microSD card (up to 32GB), and a 1500mAh battery. Connectivity options are said to include 3G, Wi-Fi, and Bluetooth 4.0.

Last month, the same retailer who leaked the aforementioned details, also said that Samsung in partnership with Aircel and Reliance will provide 500MB of free 3G data per month for six months. The other bunch of features said to come with Samsung Z1 are features like offline maps via Here maps, offline Web browsing via UC Browser for Tizen, auto selfie mode, low light photography, ultra power saving mode, and more.

The smartphone was previously tipped to reach India on January 18 this year, with a report quoting an unnamed Samsung executive who also revealed it would not be priced above Rs. 5,700. The Samsung Z1 is also said to reach China in February and Korea in H1 2015. Samsung however, has not given out any official details on the smartphone's availability and launch as of now.