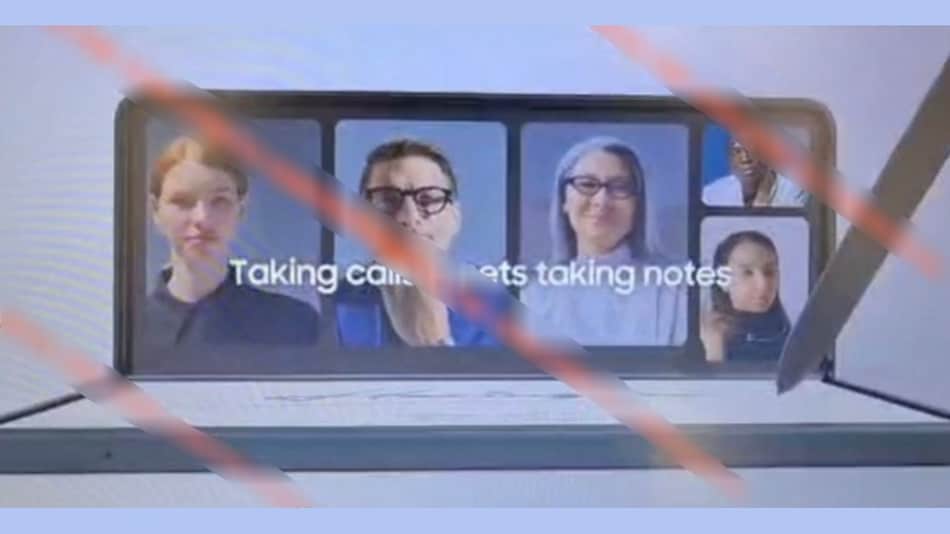 Samsung Galaxy Z Fold 3 design and specifications have been leaked via new images shared on Twitter. The images seem to be screenshots of marketing material that Samsung prepares for its smartphones. The Samsung Galaxy Z Fold 3 may be the first foldable smartphone with an under-display camera. The leaked images show multiple colour options that the upcoming foldable phone may be offered in at the time of its launch, and also suggest that it might come with S Pen compatibility.

Tipsters Szczepan Karpiel-Bułecka (@BuKarpiel) and Anthony (@TheGalox) have shared images with their tweets to show how the upcoming Samsung Galaxy Z Fold 3 is expected to look like. The tweets were first spotted by SamMobile. The upcoming foldable smartphone from Samsung could feature S Pen support. The images show how the S Pen can be used to take notes during video calls. Moreover, the Galaxy Z Fold 3 is touted to support a new Hybrid S Pen. The new stylus is said to not have a sharp tip to prevent damaging the screen, and the internal display may not scratch as easily owing to an armour protection to the screen, hinge, and bezels. The outside body may be wrapped in Corning Gorilla Glass Victus for added protection.

The leaked images also suggest that the Galaxy Z Fold 3 could be the first foldable smartphone with an under-display selfie camera. Samsung has been reportedly testing this feature for quite some time now and may release the feature with the Galaxy Z Fold 3 smartphone. Also, the leaked images show that the foldable smartphone may be available in three colour options — Black, Dark Green, and Silver. Samsung hasn't confirmed the official release date for the smartphone, but leaks suggest that it may be launched around July 2021.

Another tipster had recently claimed that Samsung may bundle a 4,275mAh battery with the Galaxy Z Fold 3 smartphone along with an IP certification for dust and water resistance. And an earlier report had claimed that the foldable smartphone may run One UI 3.5 based on Android 11 and may have at least 256GB of onboard storage.