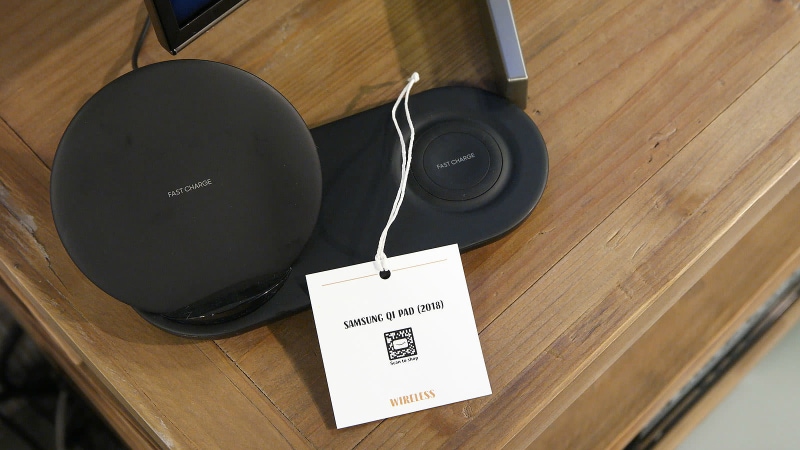 Samsung Wireless Charger Duo might launch alongside the Galaxy Note 9 on August 9.

Samsung has reportedly been working on a new wireless charging with the ability to charge more than one device at a time. Dubbed the Wireless Charger Duo, this gadget has now been spotted at a recent Amazon press event in the US. The live images are similar to the ones we saw earlier that apparently came from a retail store in Russia. The Wireless Charger Duo had been on display at Amazon's holiday press preview event among hundreds of other products that are intended to go on sale in the upcoming gifting season.

As per a report by Gizmodo, the device in question was labelled "Samsung Qi Pad (2018)", although none of the Amazon representatives seemed to know much about the product - including things like price, expected release date, and functionality. The QR code on the product also pointed towards an Amazon listing of a different Samsung wireless charger.

Elaborating on the features of the Wireless Charger Duo, the report notes that there is a single USB Type-C port on the back and two LED indicators on the front that reveal the charging status for both the pads. The report mentions that the charger was tested using a Galaxy S8, and displayed a green light. The left one is supposedly for charging smartphones, which was tested by the Gizmodo reporter, and the right one is expected to power Samsung's next smartwatch Gear S4 aka Galaxy Watch, rumoured to launch later this month.

The company's official branding with a Samsung logo was spotted on the bottom of the charging pad as was the mention of the device's power input of 12V/ 2.1A.

The report notes that the spotted Wireless Charger Duo could have mistakenly been put up on display instead of the single charging pad that Samsung usually sells. The charging pad will most likely be announced alongside the Samsung Galaxy Note 9 on August 9 in New York.

Inside the Tesla Model 3: Here's Why It's Like a Giant iPhone
Udacity, WorldQuant Join Hands to Launch AI for Trading Nanodegree Programme