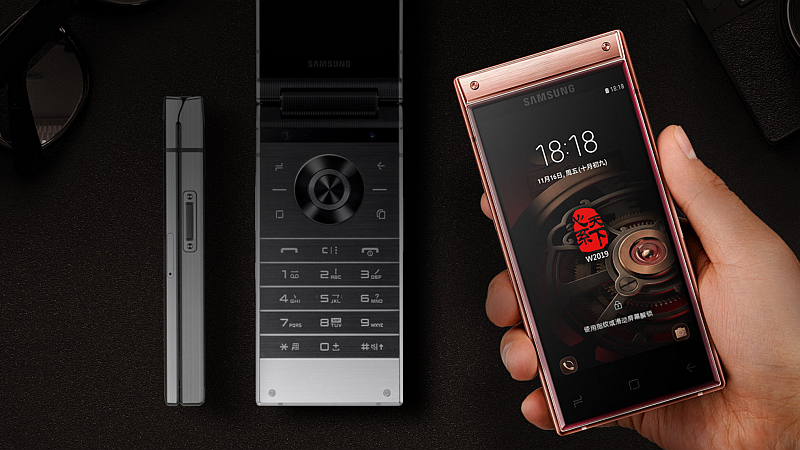 Samsung has officially unveiled the W2019 as its latest clamshell smartphone with all top-end specifications, including a couple of Super AMOLED display panels and a Snapdragon 845 SoC. The Samsung W2019 comes as a successor to the W2018 flip phone. It comes in two different variants - the Gold Extreme Edition and Platinum Golden Collector's Edition that both have similar specifications but the formal comes in Gold colour option, while the latter has a Silver paint job. The W2019 Android flip phone also includes a Bixby voice assistant integration as well as gives access to the exclusive service that can be accessed with a press-and-hold gesture on the "8" key.

The price and availability details of the Samsung W2019 are yet to be announced. However, similar to the past Android flip phone models, Samsung is likely to offer the W2019 as a China-exclusive model. The smartphone has already been listed on the Samsung China website. It comes almost a year after the South Korean giant unveiled the W2018 in China.

Similar to the previous W-series Android flip phones, the Samsung W2019 is designed with premium materials, including anodised, diamond-cut aluminium and glass. The phone also has a brushed finish and a side-mounted fingerprint sensor. Additionally, there is a compact physical T9 keypad to enable one-handed control. Users can also press-and-hold the 8 key on the keypad to access exclusive service for 12 months. This gives access to various airport and high-speed rail VIP lounges as well as airport CIP rapid security checkpoints. Customers can also avail screen and battery replacement by using the exclusive service.

The dual-SIM (Nano) Samsung W2019 runs Android 8.1 Oreo with a proprietary skin on top and features two 4.2-inch full-HD (1080x1920 pixels) Super AMOLED displays with 16:9 aspect ratio. There is an octa-core Qualcomm Snapdragon 845 SoC, paired with 6GB of RAM. The smartphone has a dual rear camera that is identical to the Galaxy S9+. It includes a 12-megapixel primary sensor with a dual f/1.5-2.4 aperture support and a 12-megapixel secondary sensor along with a telephoto lens to enable 2x optical zoom. For selfies, there is an 8-megapixel camera sensor at the front.

Samsung has given 128GB of internal storage that is expandable via microSD card (up to 512GB). The W2019 also has a bunch of connectivity options, including 4G LTE, Wi-Fi 802.11ac, Bluetooth v4.2, ANT+, NFC, and USB Type-C. Onboard sensors include an accelerometer, ambient light sensor, barometric pressure sensor, fingerprint sensor, geomagnetic sensor, gyroscope, hall sensor, iris sensor, and a proximity sensor. There is a 3,070mAh battery that is claimed to deliver up to 280 hours of standby time on a single charge. Lastly, the smartphone measures 132.9 x 63.4 x 17.3mm and weighs 257 grams.