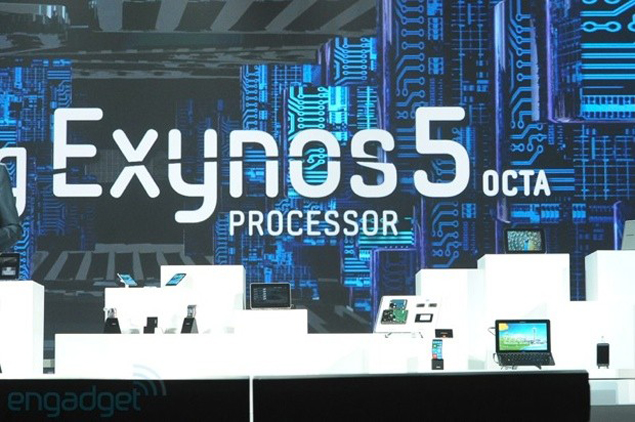 If Nvidia came with the Tegra 4 and Qualcomm brought its Snapdragon 800 Series to the CES stage in Nevada, then Samsung unveiled the next processor in its Exynos 5 lineup called the Exynos 5 Octa, an eight-core SoC dedicated to tablets and high-end smartphones.

That's right. Eight cores. These are divided into two separate groups with four-cores each. Any device that will feature the Exynos 5 Octa integration, is bound to have two quad-core processors powering it. This is one of the first chipsets to feature ARM's big.LITTLE architecture based on switching processor technology.

While four of them are Cortex-A15 cores as seen in the Exynos 5 Dual powering the Nexus 10 and Samsung's ARM Chromebook, the other four are Cortex-A7 CPU cores. The A7 cores have the same features and capabilities as the A15 cores, though they are more focussed on power efficiency than performance. The Korean manufacturer claims 70% power saving with this chip compared to its Exynos 5 Dual.

Both sets of cores are said to work in tandem together and offer great speeds without compromising on battery consumption.This differs from Nvidia's Tegra 3 and Tegra 4 SoCs, which include a low-power Cortex-A9 and a Cortex-A15 (respectively) "companion core" that can only be used when all of the SoC's other CPU cores are powered down

The new SoC will be manufactured using a 28nm process as opposed to the 32nm process used by the Exynos 5 Dual, hence claiming to be more power-efficient.

Earlier rumours were indicative of the Samsung Galaxy S IV being powered by a 2 GHz quad-core Exynos processor and an 8-core GPU, that will use ARM big.LITTLE architecture featuring a combination of an energy-efficient A7 processor and an A15 one for simple and heavy task processing.