Samsung to invest in chips, panels as smartphone growth slows

Samsung Electronics Co Ltd announced a $1 billion increase in investment on Friday, hoping a strong recovery in semiconductors will make up for weakening smartphone growth as it faces mounting pressure to produce eye-catching new gadgets.

The high-end smartphone market, which Samsung dominates along with Apple Inc, is slowing and the South Korean giant is struggling to convince investors it can crack the rapidly growing low-end segment, where its rivals include China's Huawei Technologies Co Ltd and ZTE Corp.

Samsung on Friday reported a 47.5 percent rise in April-June operating profit of a record 9.53 trillion won, in line with its estimate.

But profits at its mobile division, which generates two thirds of its total earnings, slipped 3.5 percent from the previous quarter even with the launch of its flagship Galaxy S4 in late April, sparking concerns its mobile growth momentum may have stalled as competition intensifies.

Executives offered little to give investors hope that a new market-shifting breakthrough in high-end smartphone technology is around the corner, fueling uncertainty over a segment which appears to have peaked in the first quarter after driving a series of record profits for Samsung in recent years.

Mobile division profit was still up 52 percent from a year ago but even that fell short of expectations, as slower sales of old models like the S3 and the marketing bill for the S4 took their toll.

"It is clear that the global smartphone market is stalling because of the slowing growth of high-end smartphones and rising competition from lower-priced smartphones," said Ahn Young-hoe, a fund manager at KTB Asset Management, which owns Samsung shares.

"There is no major momentum for Samsung. The key is whether Samsung, which sources smartphone parts in-house unlike Apple, will be able to cut parts costs and increase volume and market share to offset reduced smartphone margins."

Samsung warned that global smartphone sales growth could weaken further in the third quarter, and said it expected stiffer competition due to new product launches. Apple is expected to release the iPhone 5S and a low-end iPhone later this year.

"As we go into a typically strong season for the IT industry, we expect earnings to continue to increase," Samsung said in its earnings statement.

"However, we cannot overlook delayed economic recovery in Europe and risks from increased competition for smartphones and other set products."

Hot chips
Samsung forecast stronger earnings in the second half thanks in part to its component business, which was staging a solid recovery on the back of soaring prices for semiconductors used in personal computers and mobile devices. 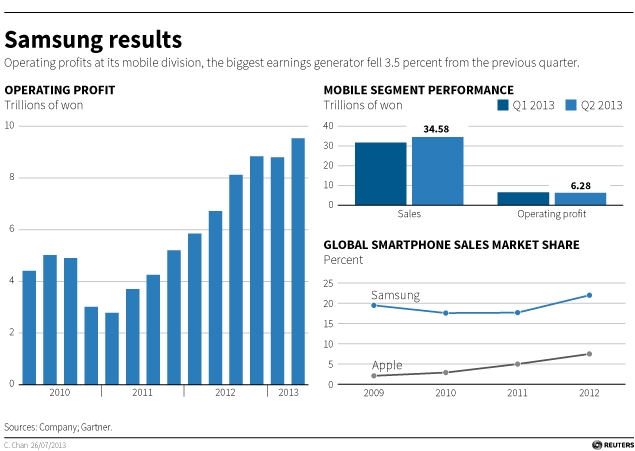 Capital spending in 2013 would increase by more than 1 trillion won to 24 trillion won, and could rise further depending on market conditions. More than 80 percent of that expenditure would be devoted to chips and flat panels such as liquid crystal displays and organic light emitting diode technology, seen as the next big thing in television.

The world's biggest maker of memory chips and televisions said profits from its chip business rose 71 percent to 1.76 trillion won in the second quarter.

Shares of Samsung, worth $172 billion, traded down 0.8 percent on Friday, lagging a 0.1 percent gain in the broader market.

The stock has lost 14 percent or 32.7 trillion won since early June, hit by a series of brokerage downgrades sparked by fears the high-end smartphone market had reached saturation.

Those concerns eased somewhat on Tuesday when Apple reported stronger-than-expected iPhone sales, even if demand was stoked by aggressively discounted older models. The California-based company still reported a fall in quarterly profit of 22 percent as its margins slipped in the absence of new products.

Research firm Strategy Analytics said Samsung sold 76 million smartphones in the second quarter to take 33.1 percent of the market, widening the gap with second-ranked Apple which saw its share shrink to 13.6 percent.

"I expect Samsung's smartphone profit to stagnate in the current quarter compared to the previous quarter as there are no sensational products in the market. This is a problem facing not only Samsung but Apple and the entire industry," said Samsung Securities Analyst Harrison Cho.

"Apple's new iPhone, which is expected to be released early September, will be nothing new."