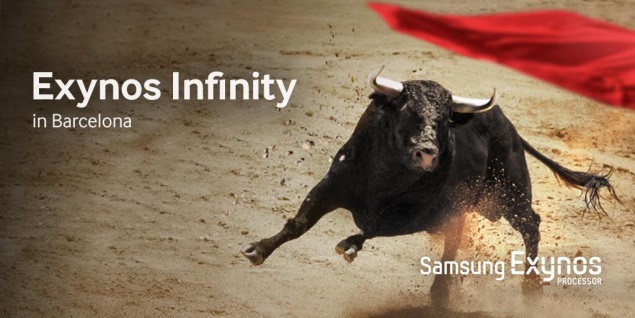 Samsung seems all set to introduce its next-generation of Exynos chipsets at MWC 2014.

The official Samsung Exynos Twitter handle has posted an image that shows a tagline "Exynos Infinity in Barcelona", suggesting that the South Korean manufacturer might reveal a new Exynos chipset next week. However, the company has not detailed anything about the upcoming new chipsets.

The tweet by Samsung Exynos reads, "Continuing our market-leading innovation and leadership, we bring you our latest innovations. Please stay tuned."

For those unaware, Samsung has already sent media invites for its "unPacked 5" event, where the company is said to unveil the next Galaxy flagship smartphone at the sidelines of MWC 2014 on February 24 in Barcelona.

The new tweet by Samsung has again kick-started the debate on whether the Galaxy S5 will be powered by a 64-bit processor, which we believe is named the Exynos Infinity by the South Korean giant.

Notably, after Apple's unveiling of the iPhone 5s, which is considered to be the first smartphone based on a 64-bit architecture chip, the South Korean electronics giant's mobile business chief Shin Jong-kyun was quoted saying that Samsung Galaxy-branded smartphones would come with 64-bit processing capability. However, we are yet to see whether Samsung's next flagship is powered by a 64-bit architecture chip.

We expect, based on previous reports, that the Samsung Galaxy S5 will be launched alongside a new tablet series, believed to be dubbed Galaxy Tab 4, at the side-lines of the MWC 2014.

Also rumoured to launch at MWC is the long-rumoured Galaxy Gear successor, named Galaxy Gear 2 at the 24 February 2014 event in Barcelona. The latest rumours surrounding the smartwatch indicate it might launch with Tizen OS, instead of Android like its predecessor.

A report on Wednesday claimed that the Galaxy S5 could be unlocked using a swipe over the home button. The report informs that Apple used a sapphire coating for its home button on the iPhone 5s, while Samsung plans to use a ultra-violet (UV) coating over its fingerprint scanner.

In addition, a report emerging from Korea claims that the Galaxy S5 will be a dustproof and waterproof device.

Facebook acquires WhatsApp: Why the messaging app is so popular in India
Samsung takes on iPad Air and iPhone 5s in cheeky new advertisements