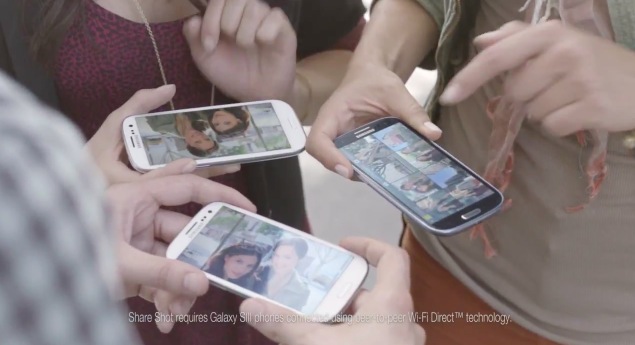 Samsung has continued its tradition of taking potshots at prospective iPhone buyers with the new Galaxy S III ad.

The ad shows a bunch of people waiting in line, purportedly for the iPhone 5. Like previous ads, this one depicts potential iPhone customers as pretentious yuppies who buy an iPhone because they don't know any better. Sample this exchange:

Or the other guy who says "I heard you have to have an adapter to use the dock on the new one", followed by another guy that says "But they make the coolest adapters!" You get the drift, but we must mention a guy with Samsung Galaxy S III standing in line. So what's he doing waiting in line for the iPhone? Holding the spot for his parents, of course, since the cool kids use Samsung Galaxy S III, or "GS3" as they evidently call it.

To be fair, the ad goes beyond potshots and does later touch upon Galaxy S III's features like S Beam, large screen and 4G-networking.

Samsung is clearly not afraid to pit the Galaxy S III directly against Apple's iPhone 5, as is evident from the full-page ads that it took out earlier this week. Not without reason. The Samsung Galaxy S III has been a huge success for Samsung, selling over 20 million units in a little over 3 months. In August, Samsung Galaxy S III sales in the United States surpassed that of Apple's iPhone 4S for the first time ever, helping it become the top selling smartphone in US. It is worth noting out that the iPhone 4S sales would've no doubt been hampered by the impending iPhone 5 launch.

iPhone 5 has been of to a brisk start itself, seeing over 2 million pre-orders in the first 24 hours, and people starting to queue up to get their hands on the latest iPhone days before it goes on general sale starting Friday.

Enough about the phones, here's the Samsung ad we talked about.