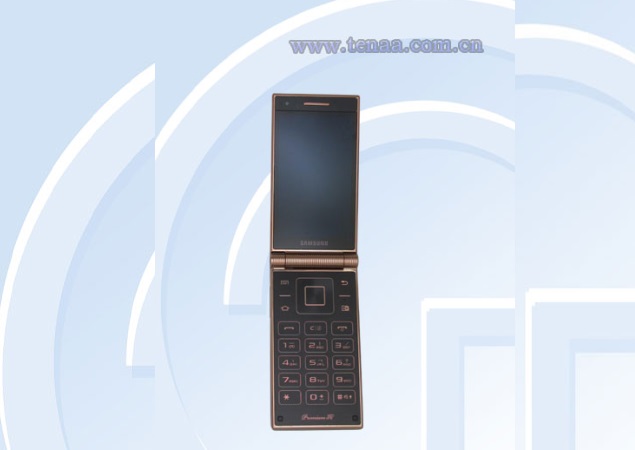 Samsung is allegedly working on a new dual-screen flip phone, the SM-W2014, if a rumour is to be believed.

The alleged Samsung SM-W2014 flip phone has been spotted at Tenaa (Telecommunication Equipment Certification Centre) which can be considered the Chinese equivalent of the US' FCC. The leaked images at the site reveal a dual-screen setup in the alleged flip phone.

Moreover, Tenaa's site has also revealed some of the specifications expected in the rumoured Samsung SM-W2014 flip phone, which include 2.3GHz quad-core Qualcomm Snapdragon 800 processor, 2GB RAM, 13-megapixel rear camera with BSI (backside illumination sensor) and 2-megapixel front-facing camera. The alleged SM-W2014 flip phone is likely to run Android 4.3 Jelly Bean out of the box. It is also likely that the phone will sport a 3.67-inch AMOLED display. The site also reveals that the phone might measure 116.85x59.4x15.79mm and weigh about 173 grams. As of now, there is no word on the availability of the alleged Samsung SM-W2014 flip phone.

Earlier this year, Samsung launched two flip phones, the Samsung W789 and Galaxy Golden. Both the handsets boast of the dual-screen setup.

On the other hand, the Samsung Galaxy Golden sports two 3.7-inch Super AMOLED displays, on the inside and the outside. The phone is powered by a 1.7GHz dual-core processor with 2GB of RAM and runs on Android 4.2 Jelly Bean. The phone also includes FM Radio and will come in Champagne Gold colour. Connectivity options include Wi-Fi, GPS and Bluetooth. It comes with an 8-megapixel camera.