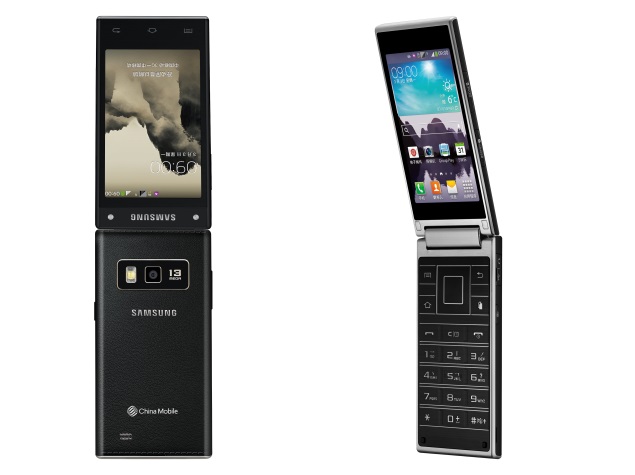 Samsung, expanding its flip phone series in China, has introduced the SM-G9098 flip phone. The latest Android-based dual-screen flip phone is now listed on Samsung's China site. Unfortunately, there is no word on the pricing and availability details of the SM-G9098.

The Samsung SM-G9098 sports two 3.7-inch Super AMOLED displays, on the inside and the outside of the top segment, both featuring a WVGA (480x800 pixels) resolution. The Samsung SM-G9098 runs on Android; however, the official listing does not specify the exact version. It offers dual-SIM (TD-SCDMA+GSM) support.

A quad-core (unspecified) processor powers the Samsung SM-G9098, clocked at 2.3GHz with 2GB of RAM. The new flip phone sports a 13-megapixel rear camera with LED flash, while there is a 2-megapixel front-facing camera also onboard.

There is no word on the inbuilt storage of the Samsung SM-G9098 flip phone, however, the official listing reveals expandable storage support up to 64GB (via microSD card).

The Samsung SM-G9098 supports Bluetooth, Wi-Fi, GPS, GLONASS, Micro-USB and 3G connectivity options. It is backed by a 1900mAh battery with no word on the talk time and standby time delivered. The new flip phone from Samsung measures 117x59.5x15.8mm and weighs 179 grams.

The Samsung SM-G9098 flip phone is seen sporting a faux leather design on the back, while the China Mobile logo is also embossed there, hinting that the device might be sold through the Chinese carrier exclusively.

The new Samsung SM-G9098 will join the already launched flip phones in China, namely the W789, W2014 and the Galaxy Golden.

Yahoo Japan Drops $3.2 Billion Plan to Buy eAccess From SoftBank
How to See Most Recent Facebook Posts on its iOS, Android Apps