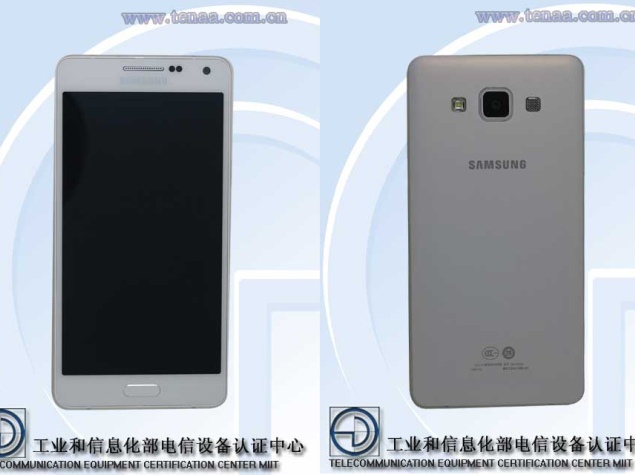 Samsung's anticipated new metal-clad SM-A500 smartphone in the rumoured A Series is claimed to have passed Tenaa certification in China as the SM-A5000.

The Tenaa listing (China's FCC equivalent) of the SM-A5000 include specifications and images similar to the recently launched metal-clad Samsung Galaxy Alpha.

The Tenaa listing specifications are in-line with details tipped by Sammobile on Tuesday. The report had suggested that Samsung "is currently making some changes to both the hardware and software" of SM-A500 and it might support the latest TouchWiz UI from Galaxy Note 4 and a 13-megapixel rear camera. Earlier, Sammobile had tipped it to include an 8-megapixel rear camera.

Earlier this month, Sammobile had reported that the Galaxy Alpha was actually the first device in Samsung's alleged new A Series of smartphones, and that the company will launch three new devices in the series, with model numbers SM-A300, SM-A500, and SM-A700, in the coming weeks.

The report had also tipped the alleged SM-A500 to feature a 5-inch HD (720x1280 pixels) Super AMOLED display; a quad-core Snapdragon 400 processor; 5-megapixel front camera; 16GB of inbuilt storage, and a 2330mAh battery. The report also claimed that the SM-A500 will have a hybrid card slot, which will accommodate both a microSD card and a Nano-SIM card.
Comments