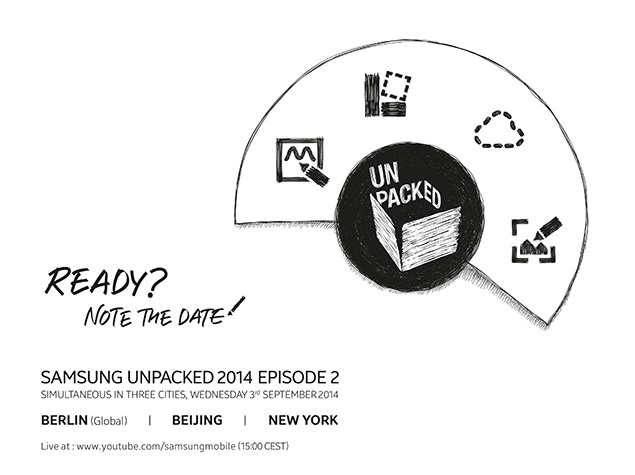 Samsung, as expected, has started sending invites for the Unpacked 2014 Episode 2 event scheduled on September 3, where the company will debut its next-generation Galaxy Note smartphone - expected to be called the Galaxy Note 4.

The company on Wednesday posted the official invitation to the pre-IFA 2014 event on its global Samsung Mobile Press page and also on its official Samsung Tomorrow page.

The South Korean giant announced that the event will take place simultaneously in three cities - Berlin, Beijing and New York - much like LG's G3 (Review | Pictures) launch that took place in three cities at the same time.

The invitation to the Unpacked 2014 event features the Air Command menu, a stylus-based UI that debuted alongside the Galaxy Note 3 (Review | Pictures) last year, accompanied by the tagline, "Ready? Note the date."

It's worth noting that Samsung has not revealed any details about the upcoming Galaxy Note smartphone in the invitation.

Notably, the company has been using the IFA trade show in Berlin to unveil its Galaxy Note phablet devices in the past. Last year, it unveiled the Galaxy Note 3 device at the event, while the Galaxy Note II was launched in 2012.

Samsung's official invite is in-line with previous rumours. It was recently also reported that the South Korean giant was planning to launch the Note 4 at an event scheduled for September 3 ahead of Apple's rumoured mid-September iPhone 6 launch.

Multiple reports on Tuesday suggested that Apple would launch the iPhone 6 on September 9. However, we are yet to hear an official announcement from the Cupertino-based company.

Some of the rumoured specifications of the Galaxy Note 4 include Qualcomm Snapdragon 805 processors with support for fourth-generation LTE mobile wireless technology, and 5.7-inch QHD (1440x2560) AMOLED display.