Samsung has reportedly sent out invites for its Unpacked 2014 event scheduled on September 3 ahead of IFA 2014 in Berlin. The South-Korean giant is expected to introduce its latest flagship phablet, the anticipated Galaxy Note 4.

The detailed invite posted by Sammobile doesn't mention the Note 4, but Samsung traditionally launches the next iteration of the Note family at the IFA event, with the company launching the Galaxy Note 3 on September 5 at IFA last year. 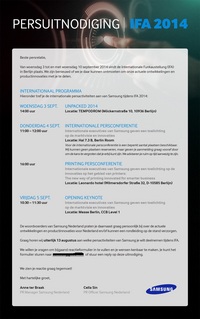 Notably, Sammobile has now removed the post with the invite, however the shared invite is still doing the rounds of the Internet. The September 3 date also corroborates a report from last week, where Korea Times cited executives of a top-tier local parts supplier for Samsung, claiming that the decision to launch the rumoured Galaxy Note 4 in September is to take on Apple's next generation iPhone devices - which are expected to be unveiled in two screen size variants, specifically 4.7-inch and 5.5-inch.

The report had also quoted an executive of a top-tier display supplier for Samsung, as saying, "Samsung will hold an event to announce the Note 4 on Sept. 3, just few days before this year's IFA trade fair in Berlin, Germany Europe's biggest technology exhibition."

Korea Times' sources had suggested that the South Korean giant is planning to soon send official invites for the reported September 3 launch event for the launch of the anticipated Samsung Galaxy Note 4. Further, the alleged Galaxy Note 4 is said to come with an ultraviolet sensor, which can measure UV radiation and offer the readings via the company's S Health app. The report also quotes an executive from a Korea-based software partner of Samsung, as saying, "The Note 4 will be the first smartphone to incorporate an ultraviolet sensor.

A recent listing on an Indian import/ export website, Zauba, tipped that the alleged Galaxy Note 4 (SM-N910A) will come with a 5.7-inch display. Another leak had indicated the next Galaxy Note phablet flagship will include a QHD (1440x2560) AMOLED display of an unknown size.
Comments