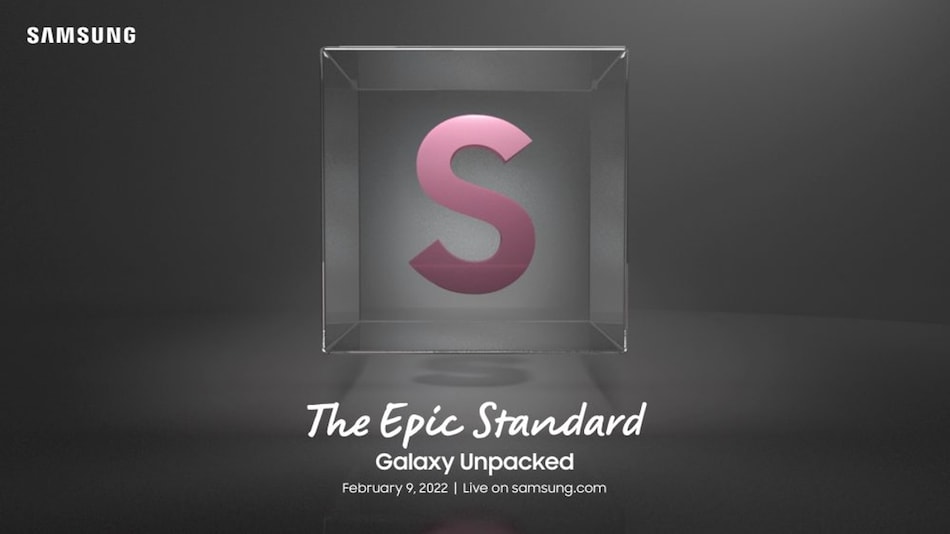 Samsung Galaxy Unpacked 2022 will take place at 10am EST (8:30pm IST) today (Wednesday, February 9). The event will be livestreamed on the Samsung.com website as well as through the company's social media channels, including Twitter and YouTube. You can also watch the event live from the video player embedded below.

The reported details suggested that Samsung will not bring any changes to the pricing of the Galaxy S22 series when compared with those in the Galaxy S21 family. However, Samsung is yet to officially confirm the pricing details.

On the part of availability, the Samsung Galaxy S22 and Galaxy S22+ are rumoured to go on sale in March, while the Galaxy S22 Ultra could debut as early as this month itself.

Previous reports indicate that the Samsung Galaxy S22 would come with a 6.1-inch full-HD+ Dynamic AMOLED 2X display with an up to 120Hz refresh rate and 1,300 nits of peak brightness. The phone is expected to have an octa-core Exynos 2200 SoC in South Korea, while its global variant is speculated to come with Snapdragon 8 Gen 1. The India variant of the Galaxy S22 series is also rumoured to have the latest Snapdragon SoC. Moreover, the phone could come with 8GB of RAM.

For photos and videos, the Samsung Galaxy S22 is rumoured to have a triple rear camera setup with a 50-megapixel primary sensor, along with a 12-megapixel ultra-wide shooter and a 10-megapixel telephoto shooter. The phone could also come with a 10-megapixel selfie camera sensor in the front.

The Samsung Galaxy S22 is rumoured to have up to 256GB of onboard storage. It could also include a 3,700mAh battery.

The Samsung Galaxy S22+ is said to have a 6.6-inch full-HD+ Dynamic AMOLED 2X display with a refresh rate of up to 120Hz. Just like the Galaxy S22, the Galaxy S22+ would come with Exynos 2200 and Snapdragon 8 Gen 1 options — depending on the market. The phone is also said to have the same rear and front cameras that are available on the vanilla variant.

Samsung could offer up to 256GB of onboard storage on the Galaxy S22+. Furthermore, the phone could carry a 4,500mAh battery.

The Samsung Galaxy S22 Ultra smartphone will come with a 6.6-inch QHD+ Dynamic AMOLED 2X display, a report suggested. The phone is also reported to have the Exynos 2200 or Snapdragon 8 Gen 1 SoC — subject to the market — along with up to 12GB RAM. Further, the Galaxy S22 Ultra is said to have a quad rear camera setup that would carry a 108-megapixel primary sensor, along with a 12-megapixel ultra-wide shooter, a 10-megapixel telephoto shooter, and a 10-megapixel sensor with a periscope-shaped lens.

Samsung is said to offer a 40-megapixel selfie camera sensor on the front side of the Galaxy S22 Ultra.

The Galaxy S22 Ultra is rumoured to have up to 512GB of internal storage. The phone could also come with the bundled S Pen. Further, it could include a 5,000mAh battery.

All three tablets in the new series are rumoured to have the Snapdragon 8 Gen 1 SoC. Samsung is also expected to offer improved S Pen support with its new models.