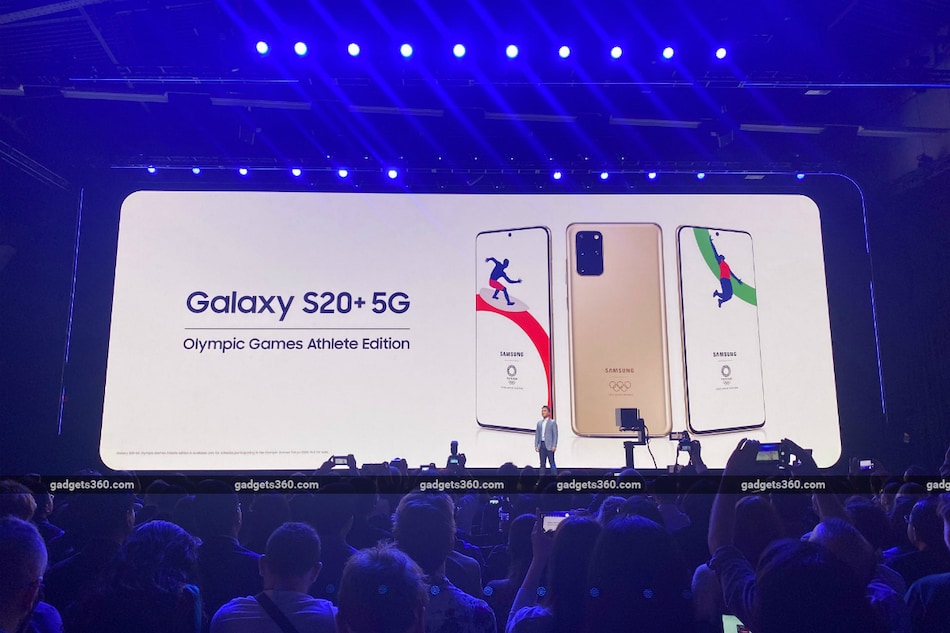 Samsung Galaxy S20+ 5G Olympic Games Athlete Edition has been unveiled alongside the regular Galaxy S20 phones at the Galaxy Unpacked 2020 event in San Francisco. The new model sports the Olympic rings at the back to commemorate Tokyo 2020 Olympics. In addition to the Olympic-themed phone, the South Korean giant has announced its partnership with New York fashion designer Thom Browne to offer the Samsung Galaxy Z Flip Thom Browne Edition. The company has also unveiled custom designed Galaxy Buds+ and Galaxy Watch Active 2 as the accessories accompanying the special-edition Galaxy Z Flip.

The Samsung Galaxy S20+ 5G Olympic Games Athlete Edition features a matte gold finish and comes preloaded with special wallpapers to support the forthcoming Tokyo Olympics. Additionally, there are Olympic rings at the back panel to give a distinct look and feel over what's available on the regular Samsung Galaxy S20+ models.

Samsung hasn't yet provided any further details about the Galaxy S20+ 5G Olympics Games Athlete Edition. However, the new model will be given to all athletes participating at Tokyo 2020 Summer Olympic Games that will begin from July 24. The company is one of the partners for the tournament that is expected to bring over 11,000 athletes.

This is notably not the first time when Samsung has brought a special Olympic Edition model of its latest flagship phone. In fact, the company just last year announced the Samsung Galaxy S10+ Olympic Games Edition in Prism White colour option to celebrate the Tokyo Olympics.

Alongside the Olympic version of the Galaxy S20+, Samsung has announced its partnership with Thom Browne to bring the Galaxy Z Flip Thom Browne Edition. The new foldable phone features Thom Browne signature brand colours on a pebble grey exterior. It is also touted to be encased in glass -- along with a matte look to attract customers at first glance. The phone also has some software-side customisations.

When turning the Samsung Galaxy Z Flip Thom Browne Edition on or off, you'll see the blinds that gives a reference to the mid-century office aesthetic at the centre of the Thom Browne world. There are also app icons labeled in classic text and various sound effects to provide a distinguished experience. Further, a custom Thom Browne wallpaper is available on the screen.

To compliment the custom changes, the Galaxy Z Flip Thom Browne Edition is bundled with the Galaxy Buds+ in matching grey and is available along with a specially designed leather case. Samsung has also provided a Galaxy Watch Active 2 with a grey leather strap and a Thom Browne custom watch face in the box of the special-edition Galaxy Z Flip.

“We designed Galaxy Z Flip Thom Browne Edition just like I do my collections—with proportion, individuality and aesthetic in mind—to create the perfect blend of art and technology,” said Browne in a prepared statement.

The Galaxy Z Flip Thom Browne Edition will be available in a limited quantity in select markets. Its pre-orders will go live through the Samsung and Thom Browne websites as well as via Net-A-Porter and Mr Porter stores starting February 14, with availability planned for March.