Samsung Quietly Shows Off 5G Phone Prototype at CES 2019, Launching in First Half of 2019 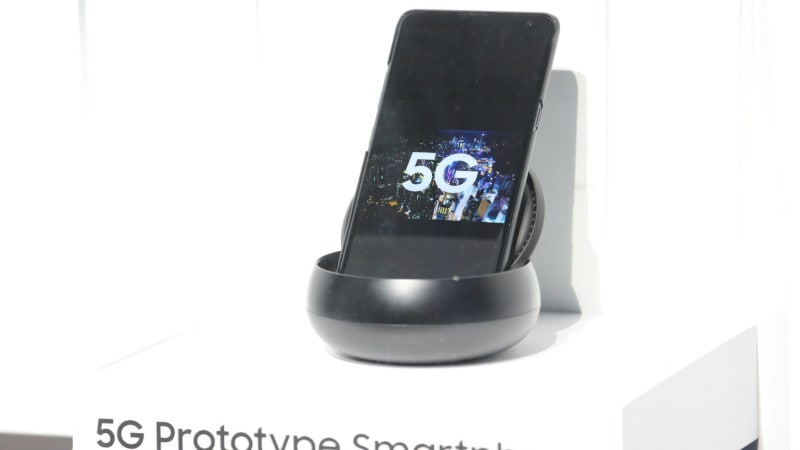 Although the official announcement of Samsung's first 5G smartphone is still months away, the South Korean company was quietly showcasing a prototype version of the device at the ongoing CES 2019 tech fair in Las Vegas. The company's first 5G smartphone is rumoured to be a variant of the company flagship Galaxy S10 and will be announced in the first half of this year. Additionally, a report claims that Samsung will be showcasing its foldable smartphone at the Galaxy Unpacked event in February.

According to a report in Venture Beat, Samsung was quietly showing off a prototype of its first 5G smartphone at the ongoing CES tech fair. The unit was placed in a protective case in an effort to not give away too many details of the device. Given that we are closer than ever to the actual launch of the company's first 5G phone, it is likely to be one of the final prototypes of the phone. Still, since it is just a prototype, the unit doesn't really offer many details, however considering the phone is expected to be a variant of the Galaxy S10, it is our first official look at the company's next flagship. The folks at Venture Beat did manage to notice a hole-punch camera present in the upper right of corner of the unit, which lines up with the rumours about the design of the Galaxy S10. Meanwhile, the company seems to have recently slipped up and revealed the Galaxy S10 design in one of the company's blogs. The leaked image too had a hole -punch camera.

Samsung has stated in an official blog post that it plans to release the 5G smartphone in the first half 2019. The exact date is still a mystery, but we should get a clearer idea at the company's Galaxy Unpacked event in February when the company will talk in detail about the Galaxy S10.

Additionally, the Wall Street Journal is reporting that Samsung plans to showcase the fully-functional foldable phone at the Galaxy Unpacked event. The report adds that the foldable phone may reach the consumers in April of this year, however no final decision has been taken as of right now. The company has also officially shied away from giving an official timeline for the launch, apart from the fact that it will arrive sometime in the coming months. It had officially unveiled a prototype of the foldable phone at the Samsung Developer Conference in November last year.

According to the rumours, Samsung will be releasing four versions of the Galaxy S10 this year, including Plus, Lite, and 5G versions. The 5G variant could also be powered by Qualcomm's Snapdragon 855 SoC.