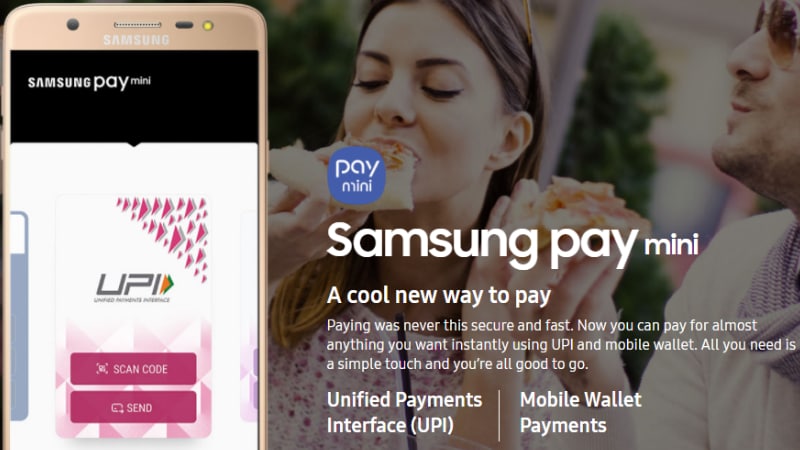 Alongside the launch of the Samsung Galaxy J7 Max and Galaxy J7 Pro, Samsung also launched a new payment solution called Samsung Pay Mini in India. Essentially, ‘Samsung Pay Mini’ looks to enable digital payments on affordable devices, and for now, it has been launched on select Samsung devices.

Samsung Pay Mini comes with UPI and mobile wallet integration, and it does not support offline tap-and-pay using credit and debit cards like the Samsung Pay main app. Samsung Pay was launched in India in March this year, and it supports both NFC and MST (Magnetic Secure Transmission) technologies that allow a user to send a magnetic signal from smartphone to the payment terminal's card reader in shops, restaurants, and other point-of-sale (PoS) terminals.

This way, Samsung Pay eliminates the need to carry debit and credit cards, allowing users to make contactless payments across various retail outlets using specific smartphones. You just need to open Samsung Pay app, select the card, touch the device to the metal strip of the PoS machine, authenticate with fingerprint and the payment is made.

Coming to the newly launched Samsung Pay Mini, it is a stripped-down version of the Samsung Pay service, and the main distinction is that it does not support the easy ‘tap & pay’ method using debit or credit card. It doesn’t work with regular swiping machines for ’tap and pay' offline payments, but supports mobile wallets and UPI for online payments. However, if a retailer accepts one of the wallets supported by Samsung Pay Mini or bank transfer, you can use it to make purchases offline.

Samsung Pay Mini is made for mid-range phones that don't come with the hardware requirements of the full-fledged Samsung Pay service. Samsung Pay Mini offers you the ability to make payments to merchants or transfer money to your friends with wallets and bank accounts (UPI) using your device, similar to other digital payment apps on your device - except it doesn’t offer a wallet of its own. You can add bank accounts registered with your phone number using UPI and wallets like Paytm, Mobikwik etc. to Samsung Pay Mini, but you cannot add debit and credit cards for now.