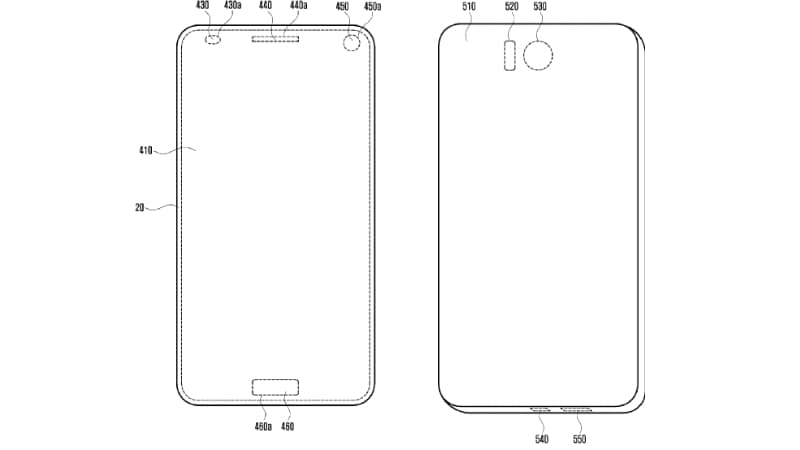 With 'fullscreen' smartphones galore in all of last year, 2018 is expected to be the year when smartphone manufacturers take it to the next level in terms of display technology. According to news reports, Samsung has filed a patent that has a concept which uses holes within the phone's screen to incorporate components like the front camera and iris scanner. The Samsung Galaxy Note 9 might be the first phone to sport such a display.

Samsung Electronics filed a patent with the World Intellectual Property Organisation (WIPO) on May 12, 2017. The patent shows a conceptual device that appears to move every visible hardware component under the display.

If this kind of technology comes to life on a Samsung smartphone, it will be a breakthrough for bezel-less displays that could possibly by stretched to the manufacturer's imagination. Moving ahead from an aspect ratio of 18.5:9, Samsung's upcoming Infinity Display might have an aspect ratio of 21:9.

The patent also reveals that the loudspeaker could be housed on the top right of the phone. Additionally, the display might allow users to switch between the fullscreen view and a regular view with cutouts.

Online reports suggest that the display could be seen as soon as the Galaxy Note 9 phablet, expected later this year. It remains to be seen, although, whether Samsung will have a production-ready design in the coming months.

Till now, flagships like the iPhone X and Essential Phone haven't been able to offer a 'truly bezel-less' experience, with a 'notch' needed for the front camera and other necessary sensors.

iPhone Battery Replacement Cost Now Down to Rs. 2,000 (All-Inclusive)
Amazon Pay Balance Can Now Be Topped Up With Cash at Your Doorstep