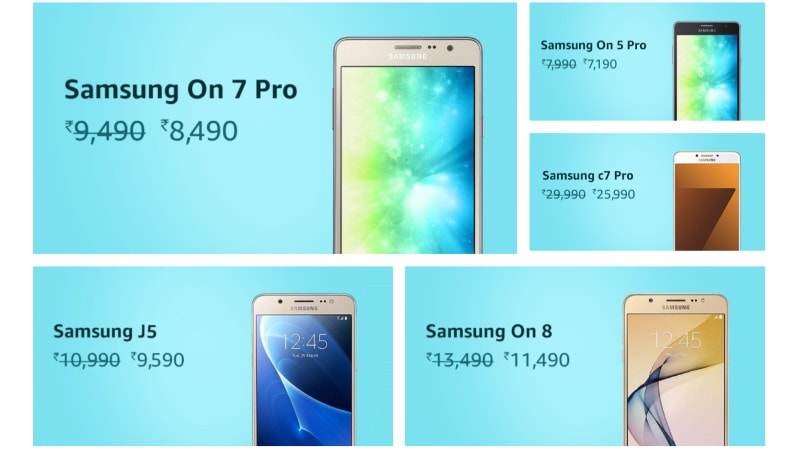 Samsung is now offering discounts on its smartphones and the Gear S3 Frontier smartwatch as part of Samsung Mobiles Fest on Amazon India. As part of the festival, which started on Monday and will continue till Wednesday, the South Korean company is offering heavy discounts on certain handsets including Samsung Galaxy C7 Pro, Galaxy On7 Pro, and Galaxy On5 Pro.

As part of Samsung Mobiles Fest, users can buy Galaxy J5 at a price of Rs. 9,590, down from its usual price of Rs. 10,990. Samsung Galaxy On8, which is usually available for Rs. 13,490 is currently being offered by the company at Rs. 11,490. Finally coming to the company's wearable, Samsung Gear S3 Frontier, which was launched in January this year, is now available at Rs. 26,500. To recall, the smartwatch was initially launched in India at Rs. 28,500.

Notably, Samsung launched its new J-series smartphone, the Galaxy J7 Nxt, with a 5.5-inch HD Super AMOLED display in India on Monday. It is powered by a octa-core processor clocked at 1.6GHz coupled with 2GB of RAM.

Uber Rival Grab to Raise $2.5 Billion From Didi, SoftBank, Others
This Startup Wants to Replace Your Office With 3D Holograms