Amazon shows front of the Samsung Galaxy M51 ahead of its official launch. 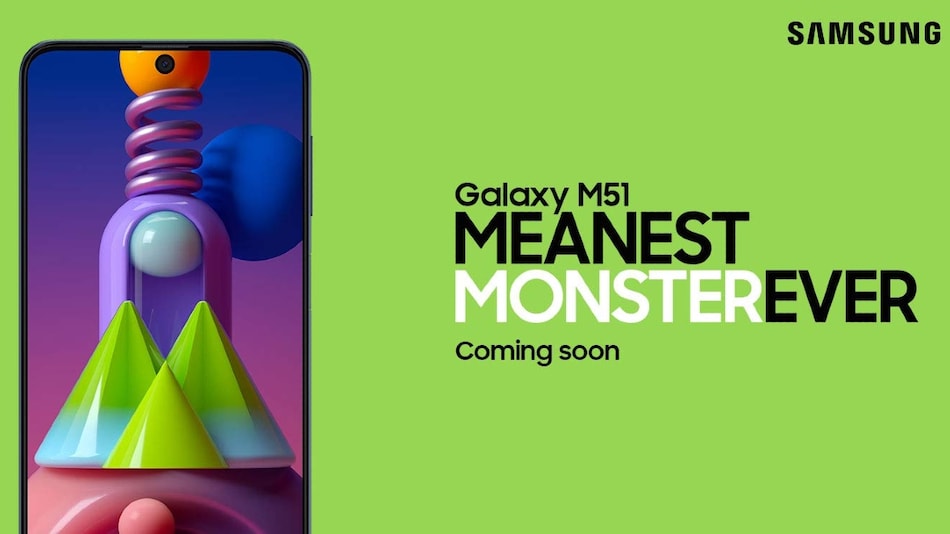 Samsung Galaxy M51 launch in India has been teased by Amazon. The online marketplace has created a microsite that gives us a glimpse of the new Samsung phone. A previous report suggested that the Samsung Galaxy M51 will debut in the country as early as the second week of September. The phone is said to carry a massive, 7,000mAh battery. Some early renders of the Galaxy M51 also suggested its multiple rear cameras and a hole-punch display design. The Samsung Galaxy M51 is also likely to come with a fast charging technology.

The microsite created by Amazon shows that the Samsung Galaxy M51 is launching in India soon. It also carries an image showing the front of the new smartphone that has a hole-punch display design — with a cutout at the centre of the display. This is unlike the early leaked renders that showed a hole cut at the top-left corner of the screen.

Alongside Amazon's microsite, Samsung India has posted a video teaser through its Twitter account that gives us a sneak peek of the Galaxy M51. The 23-second video shows the phone with a quad rear camera setup along with an LED flash module. It also suggests the presence of an in-display or a side-mounted fingerprint sensor as a rear-mounted sensor isn't visible when the phone is shown from its back side. Furthermore, the teaser video mentions a Qualcomm Snapdragon processor and a Super AMOLED Plus Infinity-O Display.

If you can guess why the all-new #SamsungM51 is the most unpredictable, power-packed #MeanestMonsterEver, you can stand a chance to win one for yourself. A mean reward for one mean monster lover out there. pic.twitter.com/o2YAzwJL6U

Samsung Galaxy M51 price in India will be between Rs. 25,000 and Rs. 30,000, as per a recent report by local news agency Indo-Asian News Service (IANS). On the availability front, the exact launch date of the Galaxy M51 is yet to be revealed. However, Samsung is running a contest in India under which it is asking users to guess the features of the new smartphone that is open until August 31. This suggests that the details about the launch could be announced anytime soon. Meanwhile, the report by IANS claimed that the Samsung Galaxy M51 would launch in the country sometime in the second week of September.

The Samsung Galaxy M51 is rumoured to feature a 6.67-inch full-HD+ display and include an octa-core Qualcomm Snapdragon 730 SoC. The phone is also speculated to have at least 8GB of RAM and come with 25W fast charging. Further, it is rumoured to have a 64-megapixel primary camera sensor. You can also expect Android 10 with One UI 2.5 on top. Moreover, the smartphone purportedly surfaced on the US FCC and Bluetooth SIG certification sites with a model number SM-M515F.