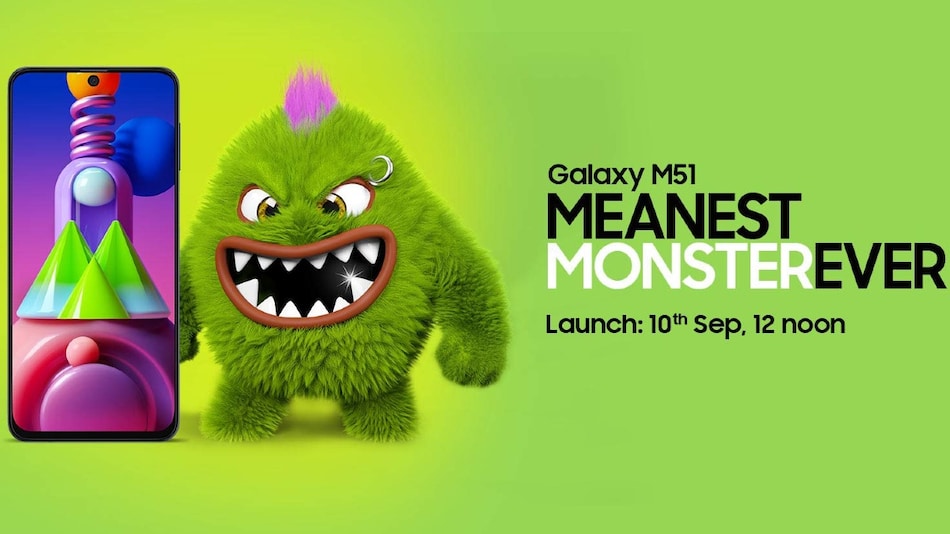 As per the microsite created by Amazon, the Samsung Galaxy M51 will be launched in India at 12pm (noon) on September 10. The Amazon listing also teases some of the key features of the Galaxy M51 as well as shows its front and back design.

Alongside the listing on Amazon, Samsung has started teasing the launch of the Galaxy M51 through the official Samsung India Twitter account.

Quick update people. We spotted Mo-B arriving in town for the Meanest Monster Face-off starting 6th Sep. We just hope he shows up and doesn't get cold feet. It will be a matter of pride for the new #SamsungM51 to prove once and for all, why it's called the #MeanestMonsterEver. pic.twitter.com/hFU619BVtf

Samsung Galaxy M51 price in India is set to be revealed. However, it is likely to be in line with the pricing announced in Germany on Monday. The smartphone debuted at EUR 360 (roughly Rs. 31,600) for the sole, 6GB + 128GB storage variant that comes in Black and White colour options. A recent report also claimed that the Galaxy M51 may arrive in the Indian market with a price tag between Rs. 25,000 and Rs. 30,000.

The Samsung Galaxy M51 runs on Android 10 with One UI on top and comes with a 6.7-inch full-HD+ Super AMOLED Plus Infinity-O Display with the hole-punch design. The phone is powered by an octa-core Qualcomm Snapdragon SoC that is reportedly Snapdragon 730, paired with 6GB of RAM. There is also 128GB of onboard storage that is expandable via microSD card. For photos and videos, the quad rear camera setup of the Samsung Galaxy M51 features a 64-megapixel primary sensor, coupled with an f/1.8 lens. You'll also get a 12-megapixel secondary sensor with an ultra-wide-angle lens, 5-megapixel depth sensor and a 5-megapixel sensor with a macro lens. The phone also includes a 32-megapixel selfie camera sensor at the front.

Samsung has provided a range of connectivity options on the Galaxy M51 including 4G LTE, Wi-Fi, Bluetooth, and a USB Type-C port. Besides, the phone packs the 7,000mAh battery that supports 25W fast charging.